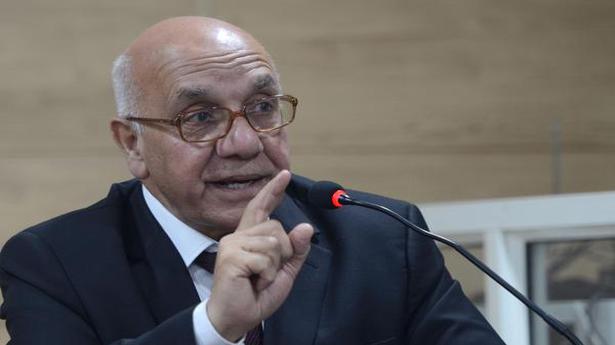 The Indian-origin MP for Ealing Southall, Virendra Sharma, is in the midst of a local political storm, following a vote of no confidence in him by the local constituency Labour Party. The vote is the first in a multi-stage process that could enable the local party to choose a new parliamentary candidate for any future general election.

Those who triggered and supported the motion against Mr. Sharma this week have expressed a number of concerns about his ability to represent the local community, pointing to a number of factors such as his failure to attend local constituency Labour meetings for the past 21 months. But their deeper concerns relate to his stance on a number of political and international issues, such as his position on issues relating to Kashmir and India-Pakistan bilateral relations, which they say endangers the politics of a very diverse London constituency.

Ealing Southall has one of the largest South Asian diasporas in the U.K., with 29.7% of its population describing itself as of Asian background in the last census. It is also religiously diverse, with 16% identifying as Muslim, 9% as Hindu, 8% as Sikh and 43% as Christian.

The issue has surfaced locally a number of times, when Mr. Sharma in 2017 referred in Parliament to Pakistan as the “world’s leading sponsor of terrorism.” Following protests, he subsequently issued an apology to the local community, but the issue has come to the forefront following the Pulwama attacks.

“People have been asking the question is he an MP for Southall and its diverse community or a representative of the Indian government?” said one local activist.

Some have pointed to a range of local issues such as the failure to support a campaign to keep Southall Town Hall — a long-standing community building — secular and avoid it being taken over by a local temple last year.

There was also disquiet about action relating to local community concerns over environmental conditions around a local “soil “hospital,” where contaminated soil is cleaned leading to “odour and air pollution on a daily and nightly basis,” according to a local campaign.

“There are concerns about the level of activity and style of activity of Virendra Sharma,” says Harsev Bains of the Indian Workers Association, who said he hoped that the MP would take the opportunity to listen to concerns that had been expressed by the community, particularly about the need to engage with local issues.

The vote was brought by the Unite union delegate branch of the local Labour party and passed by 41 votes to 18, following a two-hour general meeting on Thursday night. The motion said that the constituency party had “no confidence” in Mr. Sharma and that he had “failed to work with the local membership or act as an adequate constituency MP.”

“Party members concerns are not racially or religiously motivated. The vote was overwhelmingly against Mr Sharma and people spoke from the left and the right and all major faiths and of no faith,” says Rheian Davies, a local solicitor who moved the motion of no confidence.

“That is not to say that Mr. Sharma has not upset various sections of Southall with some of his statements and positions. Playing communal politics, as he has tried to do, is dangerous. Ealing Southall is a diverse community that lives in harmony,” she added.

Mr. Sharma has hit back at his critics, and in a statement following the vote insisted it was nothing to do with meetings of the local party but was because he had refused to “play local political games” and had publicly criticised some Labour figures. Mr. Sharma is a vocal critic of Brexit and supports a second referendum, contrary to the national party’s line on this. “The action today is motivated by religious and racial grounds and those who try to split our party do not represent our movement’s vibrant history of anti-racist campaigning,” he wrote in an emailed statement.

“We would strongly refute the claims made by Virendra Sharma that this is in any way a vote that was initiated on religious or race grounds. The CLP general committee meeting compromises 71 delegates from across Southall communities of all religions and ethnic backgrounds,” said a spokesperson for the Constituency Labour Part of Ealing Southall. “We are a very diverse CLP and the meeting itself and the debate around the no confidence vote included speakers from across religious and racial groupings. The fact that the vote was 41 of the 59 delegates present shows it was a shared view from across the religious and racial groupings of the constituency.”

The vote will not require Mr. Sharma to stand down but does mean that he could be replaced by another candidate at any future general election. The no-confidence vote enables the local party to call on Labour’s National Executive Committee to allow them to start a “trigger ballot process” that would put Mr. Sharma’s leadership to another vote. Were he to win this that would be the end of the process. Were he to lose it, it would lead to an open selection process where Mr. Sharma and other candidates could attempt to become the party’s candidate in a future election.

Israel’s president Thursday asked the Knesset to choose a new prime minister, giving the parliament three weeks to agree upon a leader or plunge the country into an unprecedented fourth consecutive election in just over a year. President Reuven Rivlin made the move after his prime minister-designate, former military chief Benny Gantz, and Prime Minister […]

IS leader Baghdadi appears in propaganda video after 5 years, says Sri Lanka was revenge for attacks on caliphate

The Islamic State on Monday released a propaganda video featuring its leader Abu Bakr al-Baghdadi. This was the first time al-Baghdadi was seen on video since July 2014. In the video, released by Al-Furqan Media this evening, Baghdadi is sitting cross-legged, close to an assault rifle. There are some men whom he is seen addressing […]