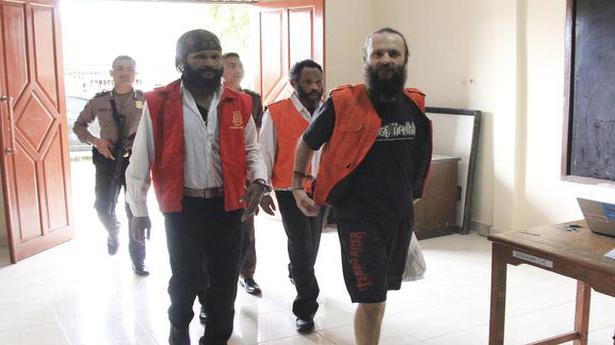 A Polish tourist who was sentenced on Thursday to five years in prison in Indonesia for treason after meeting with Papuan independence supporters has denied any wrongdoing and said he was the victim of a show trial.

Jakub Skrzypski was arrested in Wamena in the easternmost Papua region in August and accused of plotting against the Indonesian state. He said he will appeal the verdict.

One of his lawyers, Latifah Anum Siregar, said Papuan student Simon Magal, who met Skrzypski and communicated with him on Facebook, was sentenced by the same court on Thursday to four years in prison.

The case has highlighted Indonesia’s sensitivity about the volatile Papua region, where the indigenous Melanesian people oppose Indonesian rule and an insurgency has simmered for decades. The government restricts foreign journalists from reporting in its Papua and West Papua provinces.

Friends of Skrzypski, who lived in Switzerland, have said he’s an avid traveller with a fascination for other cultures who unwittingly got embroiled in Indonesian politics.

In a handwritten note sent before the sentencing, Skrzypski said his arrest and prosecution was “a purely political case, a trial staged for propaganda reasons.”

Police initially accused him of trying to organise an arms deal but it became clear that Skryzpski, who worked in a factory near Lausanne, did not have means to do that. The accusation did not become part of the case against him.

The Papuan independence cause has recently received renewed international attention and diplomatic support from sympathetic Pacific island nations. Indonesia says its sovereignty over Papua is non-negotiable and internationally recognised. The police and military have intensified a crackdown on peaceful activists following a spike in attacks by independence fighters, including a December attack that killed 19 Indonesians.

In January, the exiled leader of the United Liberation Movement for West Papua, Benny Wenda, presented a petition signed by 1.8 million Papuans to the U.N. Human Rights chief calling for a referendum on Papuan self-determination. Lawyers, meanwhile, have launched a challenge to the constitutionality of Indonesia’s incorporation of Papua into its territory in 1969 in the country’s highest court.

Skrzypski said it was unjust that his trial had taken place in remote Wamena, making it difficult for his lawyers to represent him adequately.

Polish Foreign Ministry spokeswoman Ewa Suwara said Poland’s consul in Indonesia has been in touch with Skrzypski regularly and that every effort is being made to help him. She said Polish Foreign Minister Jacek Czaputowicz has raised the case with his Indonesian counterpart.

Skrzypski, who had travelled to Indonesia previously, said he has friends in the country who sympathise with him but are afraid to show their support.

“They don’t dare to voice it, to speak up. They are afraid of troubles that they think the police and prosecutors may cause them. Same applies to my potential witnesses,” he said.

Emergency crews in the Houston area took advantage of receding floodwaters to begin to assess the damage from one of the wettest tropical cyclones in U.S. history, a storm that led to the deaths of four men and displaced hundreds of people from their homes. The aftermath from Tropical Storm Imelda, which drew comparisons to […]

Pro-Pakistani elements have infiltrated the anti-CAA protests in the US to execute their hidden agenda against India, an Indian-American community leader has said. During a recent protest against the CAA in Washington DC, posters were seen reflective of the presence of pro-Pakistani elements. Not only this, at least two Pakistani-Americans were among the main organisers […]