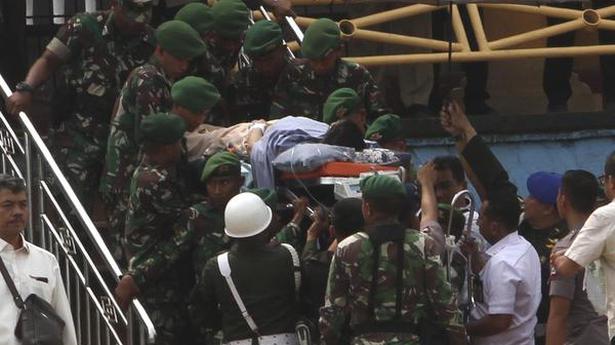 Indonesia’s Chief Security Minister Wiranto is conscious and in a stable condition after he was stabbed on Thursday by a man authorities suspect had been radicalised by Islamic State ideology, police said.

Television footage showed the minister slump to the ground beside his car after the attack in Pandeglang, in Banten province, west of the capital on the island of Java.

“His condition is stable and at the moment he is being evacuated to a hospital in Jakarta,” Tomsi Tohir, Banten police chief told Metro TV.

A police photograph showed the minister, a former general, being carried on a stretcher into a nearby hospital. The minister had suffered two wounds to his stomach, said Firmansyah, director of the Berkah Hospital.

Police had arrested a man and a woman they suspected were a couple, and seized sharp weapons they were carrying, including knives and a pair of scissors, said Mr. Tohir.

The minister had been in the area to open a new building at a university and people were lining up to shake his hand and take selfies with him before the attack around noon, said Tohir.

“For the time being, the suspicion from Banten Police, is the man is likely to have been exposed to IS radicalism while the woman is still being investigated,” said national police spokesman Dedi Prasetyo.

Officers wrestled the suspect to the ground and an image supplied by police showed the suspect, who was wearing a black shirt and light trousers, with his arms and legs secured.

Indonesia, which is the world’s biggest Muslim-majority country, is grappling with a resurgence in militancy.

The government scrambled to tighten its anti-terrorism laws after a series of suicide bombings linked to the Islamic State-inspired Jemaah Ansharut Daulah (JAD) group killed more than 30 people in the city of Surabaya last year.

Hundreds of people have been detained under the new laws since the beginning of 2019.

His appointment drew criticism from rights groups for his involvement as chief of the armed forces in the bloody upheaval in East Timor.

Mr. Wiranto was indicted by a U.N. panel over the bloodshed surrounding East Timor’s 1999 independence vote, when about 1,000 people were killed. Wiranto denied any wrongdoing in East Timor.

One of China’s longest-running independent film festivals has decided to shut down against the backdrop of mounting government censorship, saying it was no longer possible to run a “purely independent” festival in the country. The China International Film Festival (CIFF) made the announcement in a post Thursday on its official WeChat social media account. “We […]

A Pennsylvania court on Tuesday upheld comedian Bill Cosby’s sexual assault conviction and rejected his argument that the case was wrongly decided against him. The comedian’s legal team had filed an extensive appeal of Cosby’s conviction in June, CNN reported. The appeal argued that the trial court had ruled incorrectly in eight decisions, including by […]

Nepal-China railways to come up in talks with Xi Jinping: Nepal Defence Minister

Nepal-China train connectivity is expected to get priority during the coming visit of President Xi Jinping, Nepal’s Defence Minister Ishwor Pokhrel said on Wednesday. The senior Minister described the scheduled October 12-13 visit as “historic” and said both sides would take up issues such as infrastructure and connectivity during the official talks. “Rail connectivity with […]