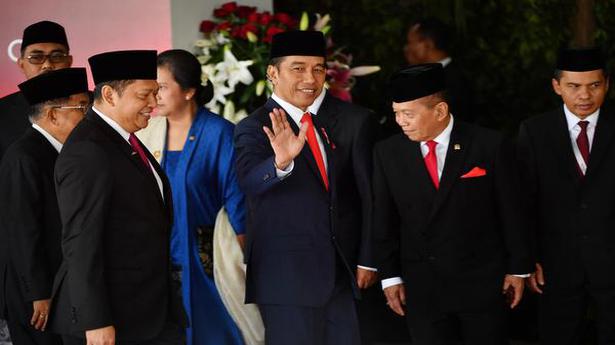 Indonesian President Joko Widodo, who rose from poverty and pledged to champion democracy, fight entrenched corruption and modernize the world’s most populous Muslim-majority nation, was sworn in on October 20 for his second and final five-year term with a pledge to take bolder actions.

Army troops and police, along with armoured vehicles, firetrucks and ambulances, were deployed across the vast capital, Jakarta, and major roads were closed in a departure from the more relaxed atmosphere of the popular Widodo’s 2014 inauguration.

An October 10 knife attack by an Islamic militant couple that wounded the country’s security minister set off a security crackdown.

Known for his down-to-earth style, Mr. Widodo, 58, opted for an austere ceremony at the heavily guarded Parliament without the festive parade that transported him after his inauguration five years ago on a horse-drawn carriage in downtown Jakarta, where he was then cheered on by thousands of waving supporters.

On his way to the ceremony on Sunday, Mr. Widodo got out of his convoy with some of his security escorts and shook supoorters’ hands, who yelled his name, waved Indonesia’s red-and-white flag and called him “bapak,” or father.

“This is the second time … most importantly, we must work together immediately to bring Indonesia to prosperity,” Mr. Widodo told reporters before leaving for Parliament, adding that he had completed picking all members of his Cabinet.

Western and Asian leaders and special envoys flew in for the event, including Australian Prime Minister Scott Morrison and Chinese Vice President Wang Qishan. President Donald Trump sent Secretary of Transportation Elaine Chao for the ceremony in Indonesia, Southeast Asia’s largest economy and a member of the G-20 bloc of nations.

Popularly known as Jokowi, Mr. Widodo is the son of a furniture maker who grew up with his family in a rented bamboo shack on the banks of a flood-prone river in Solo city on Java island. He is the first Indonesian president from outside the country’s super rich, and often corrupt, political, business and military elite.

Mr. Widodo presents himself as a man of the people, often emphasizing his humble roots. His popular appeal, including his pioneering use of social media, helped him win elections for Mayor of Solo, Governor of Jakarta and twice for president over the past 14 years.

In a reflection of his popularity as he begins his second term, he has nearly 26 million followers on Instagram and more than 12 million on Twitter.

Mr. Widodo was sworn in with his Vice President, Ma’ruf Amin, one of the most important religious figures in Indonesia, who he chose as his running mate to shore up his support among pious Muslims. Mr. Amin was chairman of Majelis Ulama Indonesia, the country’s council of Islamic leaders, and supreme leader of Nahdlatul Ulama, the world’s largest Muslim organization.

Mr. Widodo has been widely praised for his efforts to improve Indonesia’s infrastructure and reduce poverty, which afflicts close to one-10th of the sprawling country’s 270 million people.

He inaugurated the nation’s first subway system, which was financed by Japan, in Jakarta in March, after years of delay under past leaders.

Pressing on is the biggest challenge, however, in his final years in office given the global economic slowdown, major trade conflicts, falling exports and other hurdles that impede funding.

In an interview with The Associated Press in July, Mr. Widodo said he would push ahead with sweeping and potentially unpopular economic reforms, including a more business-friendly labour law, because he is no longer constrained by politics in his final term.

“Things that were impossible before, I will make a lot of decisions on that in the next five years,” he told the AP then.

The United States has carried out more tests for the novel coronavirus pandemic than 10 other countries, including India, taken together, President Donald Trump has said. Mr. Trump asserted on Sunday that the U.S. continued to make steady progress in its war against the coronavirus disease (COVID-19) and the country had tested 4.18-million people. “That’s […]

Zoya Akhtar’s Gully Boy is India’s official entry for the 2019 Oscars. The Hindi film is about the journey of an aspiring rapper from the Dharavi slums of Mumbai, fighting against the odds. It stars Ranveer Singh and Alia Bhatt. Gully Boy is inspired by the lives of street rappers Divine and Naezy. The film beat […]

Syrian army troops entered the town of Tel Tamer in northeastern Syria, state media reported on Monday, after Damascus reached an agreement with the Kurdish-led forces controlling the region to deploy into the area to counter an attack by Turkey. Tel Tamer is on a strategically important highway, the M4, that runs east to west. […]