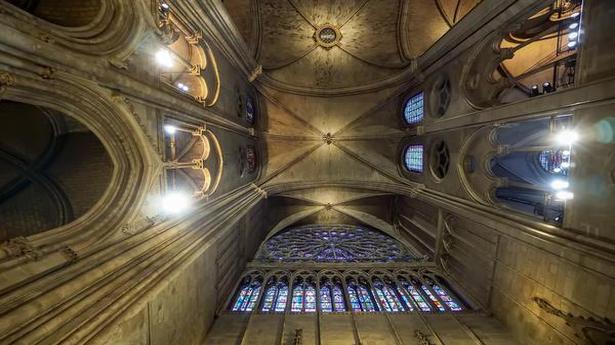 The story so far: A fire that broke out in Paris’s Notre-Dame cathedral on April 15, last Monday, caused enormous damage to the over eight-centuries-old church, which is known for its religious and historical significance as well as architectural beauty. The fire — the cause is still unknown — raged through the cathedral’s lattice of huge wooden beams (known as “the forest”) and roof and brought down its famous spire. The French government has vowed to rebuild the cathedral, with pledges of support pouring in from around the world.

What is its historical significance?

It took 182 years to complete the construction of the Notre-Dame de Paris. According to the official cathedral history, Paris Bishop Maurice de Sully started the construction of the cathedral dedicated to the Virgin Mary in 1163. The church had been a centre of attraction for pilgrims for centuries as it had priceless artefacts in its possession such as the Holy Crown of Thorns, believed to have been worn by Jesus before the crucifixion, a piece of the “True Cross” upon which he was said to be crucified, and a nail from the crucifixion. It’s believed that King Louis IX of France, who was later venerated as a saint, brought the Crown of Thorns and the fragment of the cross from the Latin Empire of Constantinople to Paris in the 13th century.

Notre-Dame, which housed several statues of kings, had attracted the anger of protesters during the French Revolution in 1789. They ransacked the cathedral, destroyed the royal statues and brought down the original spire. When Catholicism was banned in France during the Revolution, Notre-Dame was turned into a Temple of Reason. But in 1801, after a reconciliation agreement was signed between Napoleon Bonaparte and Pope Pius VII, the cathedral was returned to the Catholic Church. Napoleon chose the damaged church for his coronation as Emperor of France in 1804. The crumbling cathedral remained a venue for imperial events for years. The Hunchback of Notre-Dame, the 1831 classic by Victor Hugo, in which the protagonist — the one-eyed and deaf Quasimodo — is the bell-ringer of Notre-Dame, rekindled the interest of Paris’s elite in the dying Gothic building. In 1844, King Louis Philippe ordered its renovation. Architect Eugène Emmanuel Viollet-le-Duc and his team started the ambitious project and in 20 years, he restored it, with a new spire. The church Viollet-le-Duc rebuilt would survive till this month’s inferno.

What makes its architecture special?

Two distinct features of Notre-Dame are its flying buttresses and gargoyles. The flying buttresses are arching supporting structures providing stability to a roof or vault of the main hall, and they connect with a vertical support outside. This Gothic design feature allowed for the creation of familiar high ceilings in churches of that era, and has endured in several churches worldwide. A second intriguing feature is its gargoyles. One of the more iconic ones immortalised in numerous pictures and films came to be called le Stryge, or the vampire, sitting with its hands on the chin, tongue protruding, staring down at the city. He does not, however, serve the classic gargoyle function of a drain pipe for rainwater that is usually found in cathedrals. Viollet-le-Duc used the expression of “chimeres” or “chimeras” for the many frozen stone monsters. In some of his writings, he felt that the intense fascination with the past, surrounding structures such as Notre-Dame, reflected the despair with the present. A restored Notre-Dame with its strange creatures led to the creation of a balustrade. Historian Michael Camille says many visitors frequented it, one of the more famous being Sigmund Freud, in the late 19th century.

What is in store?

French officials have said that while the blaze has destroyed the cathedral’s roof and spire, its structure remains sound “with some vulnerabilities”. Most of the relics, including the Crown of Thorns, were rescued from the blaze. The cathedral’s famed rose windows appear to be safe and its 8,000-pipe Great Organ, with some pipes dating to before the 1730s, is intact. French President Emmanuel Macron has said that the cathedral will be rebuilt in five years, and at least $1 billion have been pledged for its restoration from around the world within days of the tragedy. But repairing the 850-year-old structure is a long road ahead. The original roof and the beams were wooden and rebuilding them exactly as they were before the fire needs hundreds of trees, which itself is a challenge. The restoration cost is yet to be decided as the extent of the damage is still being assessed. France might get donations for the restoration, but large-scale spending on the cathedral could also cause social tensions, especially at a time when the economy is going through a tough phase and grappling with large-scale protests.

When David Cameron made an election manifesto commitment to hold a referendum on Britain’s EU membership back in 2015, he faced accusations of putting his party before his country. In fact, European Council president Donald Tusk told the BBC earlier this year that even Mr. Cameron had acknowledged to him that it was about his […]

The Taliban released 27 peace activists on Thursday, a day after they were abducted in an ambush on their convoy in western Afghanistan, a leader of the activist organisation said. Phone lines were down in the region, making communication difficult and the reason for the activists’ abduction was still unclear, said Bismillah Watandost of the […]