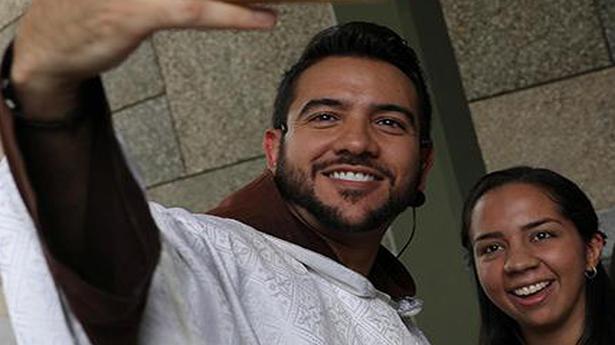 Venezuelan priest Luis Antonio Salazar has built a solid social media following over the past two years preaching the Bible over Instagram, breaking the mould of the country’s conservative Catholic church.

Now he has raised his profile further by showing his support for opposition leader Juan Guaido and joining massive anti-government protests dressed in his cassock, offering blessings one moment and running from tear gas the next.

“If the people are on the street, you have to be with the people,” the former male beauty pageant contestant said in his office in eastern Caracas, decorated with a cross and pictures of the Virgin Mary. “Since January 23, I started going into the streets to accompany the people.”

Mr. Salazar, a friar of the Capuchin order who was once a contestant in a Venezuelan survival reality show, uses his iPhone to film a video series called “Living the Gospels”, a modern take on theology broadcast on Saturdays to 30,000 Instagram followers.

The one-minute videos discuss concepts such as inner peace through references to animated film Kung Fu Panda and the 2000 action comedy Miss Congeniality.

“For me, he’s like the rock-star priest, the millennial priest,” said student Carol Alvarez, 23, who hopes Mr. Salazar will lead her confirmation ceremony. Mr. Salazar also holds traditional Sunday mass that combines the youthful demeanour of his social media videos with Catholic prayers and traditions.

One such mass in May brought about 400 attendees — most significantly older than his typical Instagram audience — who stood in line to greet him and take selfies.

“I explain quickly and (explain) how people can use it in their lives,” he said. “People tell me ‘if someone can explain it to me, I’ll understand it use it in my life’.”

Mr. Salazar said he got involved in the protests against President Nicolas Maduro because being political is part of being Venezuelan: “From the peasant who harvests potatoes to Juan Guaido, the president in charge… we all talk about politics. I cannot exempt myself.”

The fifth phase of meetings between Zalmay Khalilzad, the U.S.’s special envoy for peace, and Taliban leaders concluded earlier this month. Very little has been revealed about the nature of the proposed deal between the two parties, raising serious concerns among Afghans, especially women, who suffered greatly the last time the Taliban had control over […]

A sub-group of the global terror financing watchdog FATF on Tuesday recommended continuation of Pakistan in the ‘Grey List’ for its failure to check terror funding and a final decision will be taken on February 21, sources said on Tuesday. The decision was taken at the meeting of the FATF’s International Co-operation Review Group (ICRG), […]

A five-member Central team has projected that the number of COVID-19 cases in Mumbai will touch an estimated 42,604 by April 30 and spiral to 6,56,407 by May 15. The Indian Council of Medical Research (ICMR) has directed the States not to use the COVID-19 rapid testing kits for the next two days following reports of wide variations in […]