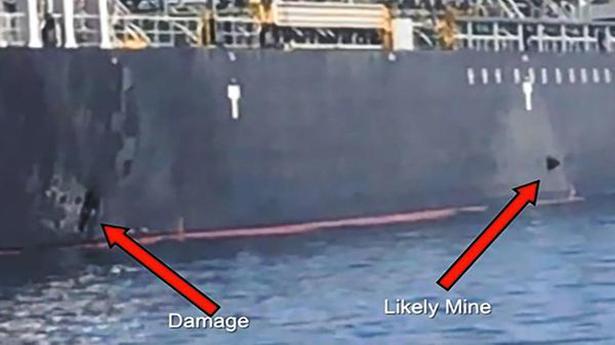 U.S. President Donald Trump has said Iran was behind the attack on two ships on the Gulf of Oman, while the Central Command (CENTCOM) released a video purportedly showing an Iranian patrol boat removing an unexploded mine from the hull of Japanese owned chemical tanker Kokuka Courageous.

The Kokuka Courageous and another ship, a Norwegian-owned oil tanker, came under attack on Thursday in the Gulf of Oman.

“Iran did do it and you know they did it because you saw the boat,” Mr. Trump said on the TV programme Fox and Friends on Friday morning. “I guess one of the mines didn’t explode and it’s probably got, essentially, Iran written all over it.”

The video shows a patrol boat pull up next to the Kokuka Courageous. A person, standing at the bow of the boat is seen removing an object from the hull of the tanker. That object in the video was an unexploded limpet mine and the individuals belonged to the Islamic Revolutionary Guard Corps, according to the U.S. Central Command.

Earlier on Thursday afternoon, the State Department had called a press briefing with Secretary of State Michael Pompeo, who told reporters that the U.S. believed Iran was to blame for the attacks.

“This assessment is based on intelligence, the weapons used, the level of expertise needed to execute the operation, recent similar Iranian attacks on shipping, and the fact that no proxy group operating in the area has the resources and proficiency to act with such a high degree of sophistication,” Mr. Pompeo had said.

“On April 22, Iran promised the world that it would interrupt the flow of oil through the Strait of Hormuz. It is now working to execute on that promise,” Mr. Pompeo said, listing a number of attacks over the last few weeks, that the U.S. believes Iran orchestrated. The list included an attack on four ships in the Strait of Hormuz on May 12.

Mr. Pompeo said the Iranians had insulted Japan by attacking a Japanese tanker as Japanese Prime Minister Shinzo Abe was in Tehran to convince the Iranians to enter into talks.

Mr. Pompeo reacted to the tweet at the press briefing. “Foreign Minister Zarif may think this is funny, but no one else in the world does. Iran is lashing out because the regime wants our successful maximum pressure campaign lifted.”

While in Tehran, Mr. Abe had called for Iran to play a constructive role in maintaining peace in West Asia.

President Trump said that both sides were not ready for a new deal. “While I very much appreciate PM Abe going to Iran to meet with Ayatollah Ali Khamenei, I personally feel that it is too soon to even think about making a deal. They are not ready, and neither are we!” Mr. Trump tweeted on Thursday.

Iranian President Hassan Rouhani called the U.S. a “serious threat to global stability” as he attended an international forum in Kyrgyzstan. “Over the last two years… using its economic, financial and military resources (it) has taken an aggressive approach.”

Iran said its Navy rescued several dozen crew members from the two vessels, while the U.S. Navy said it had picked up 21 from the Kokuka Courageous.

Iran’s English-language Press TV aired footage of rescued crewmen from the Front Altair, saying they are all in “full health.”

“Everything is OK,” said one of the vessel’s “chief officers”, presenting himself as Russian and thanking Iran for its “hospitality.” Press TV said 11 of the crew were Russian, 11 Filipino and one Georgian.

The crew of the Kokuka Courageous saw a “flying object” before a second blast on board, the operator’s head said on Friday.

“The crew members are saying that they were hit by a flying object. They saw it with their own eyes,” Yutaka Katada, head of Kokuka Sangyo shipping company, told reporters.

Washington has dispatched the destroyer, USS Mason, to the scene “to provide assistance,” CENTCOM said in a statement while Oman said it sent two navy vessels to assist.

The U.S. has also accused Iran over May 12 attacks on four tankers anchored in the Gulf of Oman off the UAE port of Fujairah. The preliminary findings of a five-nation investigation indicated a state actor was responsible but stopped short of naming Iran.

The U.S. called on Thursday for the UNSC to confront the “clear threat” posed by Iran.

Oil prices jumped at the threat of an open conflict around the Strait of Hormuz, the chokepoint through which some 15 million barrels of crude pass daily.

Pakistan People’s Party (PPP) Chairman Bilawal Bhutto-Zardari has said that the people of Balochistan province had been deprived from reaping the benefits of the China-Pakistan Economic Corridor (CPEC) by changing the route of the project. “We (PPP) brought revolutionary projects like CPEC that was meant for you, the people of Balochistan, (particularly) the residents of […]

From Libya to Texas, nearly 71 million people were displaced around the world in 2018

They are trapped in squalid detention centers on Libya’s front lines. They wash up on the banks of the Rio Grande. They sink without a trace – in the Mediterranean, in the Pacific or in waterways they can’t even name. A handful fall out of airplanes’ landing gear. As their choices narrow on land and […]