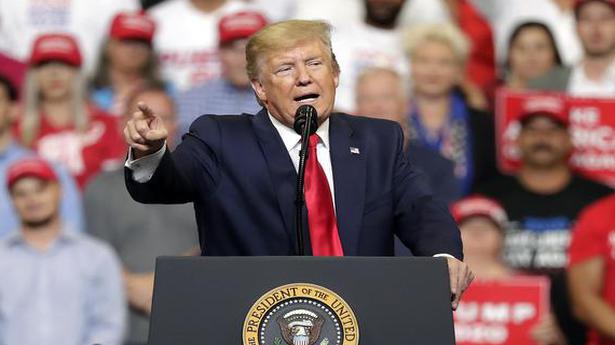 President Donald Trump said on Thursday that Tehran had made a “very big” error, after Iranian forces shot down a U.S. spy drone near the strategic Strait of Hormuz.

“Iran made a very big mistake!” he tweeted in his first public reaction to the strike.

Iran’s Islamic Revolutionary Guard Corps earlier said it had brought down the surveillance drone after it entered its country’s airspace. The Pentagon said the incident occurred in international airspace.

The drone shooting adds to growing tensions as Tehran pushes back against surging US diplomatic, economic and military pressure.

Mr. Trump has repeatedly said he does not favour war with Iran unless it is to stop the country getting a nuclear weapon — something Iranian leaders insist they are not pursuing.

Critics of the Trump administration say that his policy of “maximum pressure” — including crippling economic sanctions, abandonment of a complex international deal to regulate Iran’s nuclear activities, and deployment of extra sea, air and land forces to the region — make war ever more likely.

The drone downing came as Iran was already accused by Washington of having carried out explosions on two oil tankers in the congested Hormuz area. Tehran denies having been behind the attacks but has frequently threatened in the past to block the sealanes used by shipping to move much of the world’s oil exports.

Two University of Texas students from India drown in Oklahoma

Authorities say two University of Texas students from India drowned at a popular tourist destination in Oklahoma. The Davis Police says the foreign exchange students died Tuesday at Turner Falls, near Davis. One of them was struggling in a pool near the falls and the other jumped in to help. Neither resurfaced. Police say they […]

The Azaadi March that started from Karachi on October 27, under the leadership of Jamiat Ulema Islam Fazl (JUI-F) led by Maulana Fazl-ur-Rehman, has finally reached the capital Islamabad with an aim to oust the Imran Khan government from power. The rally entered into Islamabad with roaring slogans, chanted by a convoy of hundreds and […]

Central security agencies have told the State police that at least two persons in north Kerala were in direct and possibly prolonged contact with Zaharan Hashim, the architect of the Easter day suicide bombings in Sri Lanka. The National Investigation Agency (NIA) had on Sunday inspected their homes in Palakkad and that of two of […]