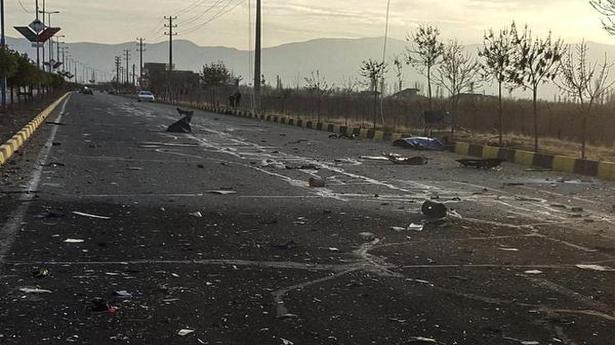 Israel declined to immediately comment on the killing of Mohsen Fakhrizadeh, who Israeli Prime Minister Benjamin Netanyahu once called out in a news conference saying- “Remember that name.”

An Iranian scientist that Israel alleged led the Islamic Republic’s military nuclear program until its disbanding in the early 2000s was “assassinated” Friday, state television said.

Israel declined to immediately comment on the killing of Mohsen Fakhrizadeh, who Israeli Prime Minister Benjamin Netanyahu once called out in a news conference saying- “Remember that name.” Israel has long been suspected of carrying out a series of targeted killings of Iranian nuclear scientists nearly a decade ago.

The semiofficial Fars news agency, believed to be close to the country’s Revolutionary Guard, said the attack happened in Absard, a small city just east of the capital, Tehran. It said witnesses heard the sound of an explosion and then machine gun fire. The attack targeted a car that Fakhrizadeh was in, the agency said.

Those wounded, including Fakhrizadeh’s bodyguards, were later taken to a local hospital, the agency said.

State television on its website later published a photograph of security forces blocking off the road. Photos and video shared online showed a Nissan sedan with bullet holes through windshield and blood pooled on the road.

No group immediately claimed responsibility for the attack. However, Iranian media all noted the interest that Mr. Netanyahu had previously shown in Mr. Fakhrizadeh.

Mr. Fakhrizadeh led Iran’s so-called “Amad,” or “Hope” program. Israel and the West have alleged it was a military operation looking at the feasibility of building a nuclear weapon in Iran. Tehran long has maintained its nuclear program is peaceful.

German Chancellor Angela Merkel went into quarantine on Sunday after coming into contact with a coronavirus-infected doctor shortly after announcing more curbs on social interaction to slow the spread of the disease. Ms. Merkel, will continue her work from home and will submit to repeated tests over the next few days, her spokesman said in […]

US increasing scope complexity and frequency of military engagements with India: Shanahan

The US is increasing the scope, complexity and frequency of its military engagements with India, now a “Major Defence Partner”, Acting Defense Secretary Patrick Shanahan said Saturday. Defence cooperation and peacekeeping are two key areas of the rapidly growing US-India partnership as envisioned in the Trump administration’s Indo-Pacific Strategy. “US-India defence relations have strengthened significantly […]

Despite the threat of COVID-19 and an Opposition boycott, a constitutional referendum was held in Guinea on Sunday that opponents of President Alpha Conde fear could allow him to govern for 12 more years. Opposition supporters heeding a call to disrupt the referendum and simultaneous legislative election attacked several polling stations in the capital Conakry, […]