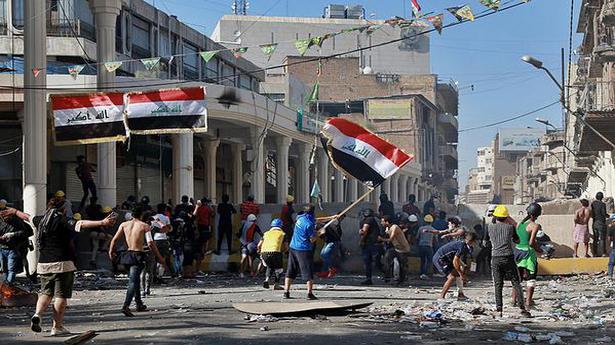 Iraqi security forces began clearing protest sites in Baghdad and across the south on Saturday, after political leaders agreed to stand by the current government by any means necessary, including force.

The fractured political class appears to have rallied around embattled Prime Minister Adel Abdel Mahdi, whose government was threatened by the largest and deadliest grass-roots protests in Iraq in decades.

On Saturday, security forces wrested back control of three bridges over the River Tigris in the heart of Baghdad that had been partially occupied by anti-government protesters. They retook the Al-Sinek, Al-Shuhada and Al-Ahrar bridges that link the east bank, where the main protest camps are located, with west bank districts which are home to government offices and foreign embassies. Nearly 300 people have died in protest-related violence since rallies erupted on October 1, spreading from Baghdad to cities across the south.

Public anger first focused on widespread corruption and a lack of jobs, then escalated into calls for the entire ruling system to be overturned.

The protests initially took the government by surprise but Iraq’s entrenched political class has since closed ranks to protect its rule.

Currently, telecommuting arrangements are in place at the UN Headquarters till June 30 due to the COVID-19 pandemic. Source: thehindu.com Related

The suicide bomber waited patiently in a queue for the Easter Sunday breakfast buffet at Sri Lanka’s Cinnamon Grand hotel before setting off explosives strapped to his back. Carrying a plate, the man, who had registered at the hotel the night before as Mohamed Azzam Mohamed, was just about to be served when he set […]

For Israeli PM Benjamin Netanyahu, party’s support is key to his political survival

Prime Minister Benjamin Netanyahu looked to project business as usual on Sunday as he returned to work following his indictment on graft charges, but a wall of silence from his usually loyal Cabinet Ministers indicated tough times ahead for the embattled Israeli leader. Mr. Netanyahu is determined to fight the charges from the Prime Minister’s […]