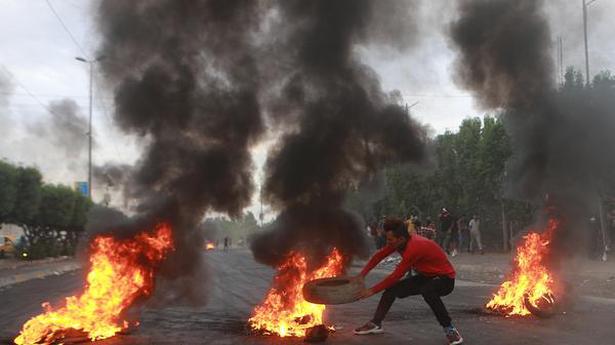 At least eight people were killed in new clashes between Iraqi security forces and anti-government protesters on Sunday, the sixth day of unrest in which the death toll has now passed 100 and more than 6,000 have been wounded.

The eight were killed in eastern Baghdad, police sources said, after police backed by the armed forces used live rounds. The demonstrators had taken to the streets hours after the government announced reforms to try to ease anger over corruption and unemployment.

The unrest is the biggest security and political challenge for Prime Minister Adel Abdul Mahdi’s government since it took power a year ago. The clashes have revived fears of a new spiral of violence that could suck in influential militia groups and be exploited by Islamic State.

Before the latest clashes in the Sadr City residential district of the capital, an Interior Ministry spokesman said 104 people had been killed, including eight members of the security forces, in the unrest since Tuesday.

He said 6,107 had been wounded, including more than 1,000 police and security forces, and dozens of buildings had been set ablaze, he added. But he denied the security forces had fired directly at the protesters.

Two years after oil-producing Iraq declared the defeat of Islamic State, security has improved but corruption is rampant, wrecked infrastructure has not been rebuilt and jobs are scarce.

The protests, which have hit many parts of the country, do not appear to be organised by a single political group and seemed to catch the government by surprise.

At an emergency cabinet meeting on Saturday night, the government agreed a 17-point plan to increase subsidized housing for the poor, stipends for the unemployed and training programs and small loans initiatives for unemployed youth.

The families of those killed during demonstrations this week will also receive handouts and care usually granted to members of the security forces killed during war, it said.

“Amid all of this, I swear to God that my only concern is for the casualties,” Abdul Mahdi was quoted by state television as saying during the cabinet meeting.

Details of the plan were disseminated on social media, but there was a continued internet outage across most of the country.

Calm returned for hours on Sunday to heavily guarded Baghdad and southern provinces where there have been heavy clashes in the past few days. But violence broke out again in eastern Baghdad after nightfall.

There were small protests that dispersed without violent outbreaks in Diwaniya and in the holy city of Najaf.

“Security forces did all they could to preserve the safety of the protesters and security personnel,” Interior Ministry spokesman Major General Saad Maan said. “We express our deep regret over the bloodshed.”

Maan dismissed talk of clashes between security forces and demonstrators, saying there were “malicious forces” who targeted both groups. But Iraq’s semi-official High Commission for Human Rights heavily criticised the police response.

“There is no justification for the use of live bullets against peaceful demonstrators,” Aqeel al-Musawi, the commission’s head, said in a statement. “The government has a duty to protect the demonstrators and enable them to express their legitimate demands smoothly.”

Anger among the protesters runs deep, and the government faces opposition among parliamentary blocs that have begun boycotting legislative meetings.

Influential Iraqi cleric Moqtada al-Sadr, who has a mass popular following and controls a large chunk of parliament, has demanded the government resign and snap elections be held. At least one other major parliamentary grouping allied itself with Sadr against the government.

The governor of Baghdad province, whose position is not very influential, resigned on Sunday after accusations by protesters that he failed to improve conditions in the city.

But powerful political parties that have dominated Iraqi politics since the 2003 U.S.-led invasion and toppling of dictator Saddam Hussein have not indicated they are willing to relinquish the institutions they control.

The violence continued as people began journeying across southern Iraq for the Shi’ite pilgrimage of Arbaeen, which is expected to attract 20 million worshippers.

A Cessna 182 airplane crashed in Ecuador’s Amazon region, killing all four people aboard, authorities said on Saturday. The plane was carrying a pilot and three passengers, the civil aviation authority said. The cause of the crash was not immediately known but an investigation has been launched. The plane went down Friday near the borders […]

Japan began its first commercial whale hunts in more than three decades on Monday, brushing aside outrage over its resumption of a practice that conservationists call cruel and outdated. Five vessels from whaling communities left port in northern Japan’s Kushiro and by afternoon, a first whale had been caught. The country’s Fisheries Agency said it […]

With Israel election in sight, Netanyahu stumps with Trump

Israel’s prime minister has gotten a welcome lift from his friend in the White House as he finds himself in a tight race for re-election. Benjamin Netanyahu’s campaign speeches, billboards and social media videos all heavily feature President Donald Trump’s image, statements and pro-Israel actions as endorsements of the long-seated prime minister. Mr. Netanyahu has […]