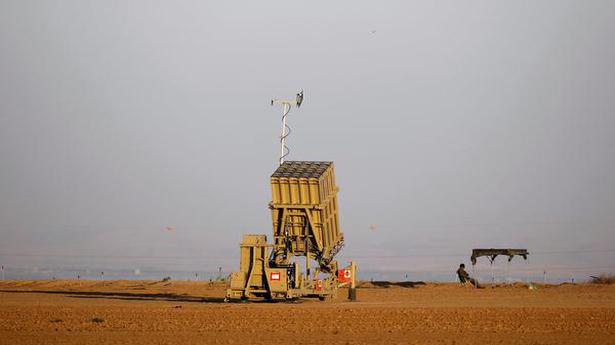 An early morning rocket from Gaza struck a house in central Israel on Monday, wounding six people, including one moderately, an Israeli rescue service said.

The sounds of air raid sirens woke up the residents of the residential Sharon area and a strong sound of an explosion followed. The Israeli military said it identified a rocket fired from the Gaza Strip and was investigating.

Magen David Adom rescue service said it was treating six people after a house was struck. It said a 50-year-old woman was moderately wounded and the others, including an infant, were slightly injured.

The attack comes 10 days after rockets were fired toward Israel’s densely populated commercial capital of Tel Aviv. The Israeli military struck back hard in Gaza and the sides appeared to be hurtling toward another confrontation. But Gaza’s Hamas leaders said the rocket was fired accidently and calm was quickly restored.

There was no immediate claim of responsibility to Monday’s incident.

Gaza is controlled by Hamas, an Islamic militant group that seeks Israel’s destruction. The territory is home to other militant groups, including Islamic Jihad, an Iranian-backed armed organization that also has a formidable rocket arsenal.

Israel and Hamas are bitter enemies and have fought three wars since the Islamic militant group seized power in Gaza in 2007. Smaller flare-ups have occurred sporadically since Israel and Hamas fought their last war, in 2014.

A number of global airlines, including Air India, British Airways, Lufthansa, Lion Air and Indigo airline on Wednesday suspended their flights to Chinese cities as Beijing struggled to contain the rapid spread of the coronavirus within the country. The coronavirus outbreak began in Wuhan, capital of central China’s Hubei province, in December and it has […]

Apple and Google plan software to slow spread of coronavirus

Apple Inc and Alphabet Inc’s Google said on Friday that they will work together to create contact tracing technology that aims to slow the spread of the Coronavirus by allowing users to opt into logging other phones they have been near. Also read: Coronavirus | Worldwide death toll crosses 1,00,000 The rare collaboration between the […]