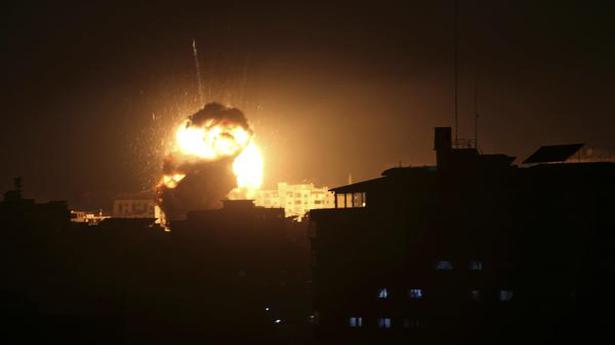 The Israeli military said on Friday that it launched “wide-scale” airstrikes on militant targets in the Gaza Strip shortly after Palestinian militants fired three rockets into Israel, two of which were intercepted.

There were no reports of casualties or major damage from the exchange of fire overnight, which came amid heightened tensions after President Donald Trump released his Mideast plan, a U.S. initiative aimed at ending the conflict that heavily favors Israel and was rejected by the Palestinians.

Gaza has been relatively calm in recent months as Egyptian and U.N. mediators have worked to shore up an informal truce between Israel and Hamas, the Islamic militant group that rules the coastal territory.

Both Hamas and the Palestinian Authority have rejected the Trump plan, which would allow Israel to annex all of its Jewish settlements, along with the Jordan Valley, in the occupied West Bank. The Palestinians were offered limited self-rule in Gaza, parts of the West Bank and some sparsely populated areas of Israel in return for meeting a long list of conditions.

The British-flagged oil tanker Stena Impero, which had been held off the Iranian port of Bandar Abbas for more than two months, set sail Friday, an Iranian shipping organisation said. The ship’s seizure was widely seen as a tit-for-tat move after authorities in the British overseas territory of Gibraltar detained an Iranian tanker on suspicion […]

The worldwide death toll from the novel coronavirus (COVID-19) pandemic rose to 1,65,216 on Monday, according to a tally from official sources compiled by AFP. Coronavirus India lockdown Day 27 updates More than 24,03,410 declared cases have been registered in 193 countries and territories since the epidemic first emerged in China in December. Of these […]

Armed police in New Zealand swarmed central Christchurch on Friday amid a shooting at a mosque in the South Island city. “A serious and evolving situation is occurring in Christchurch with an active shooter,” police said in a statement. “Police are responding with its full capability to manage the situation, but the risk environment remains […]