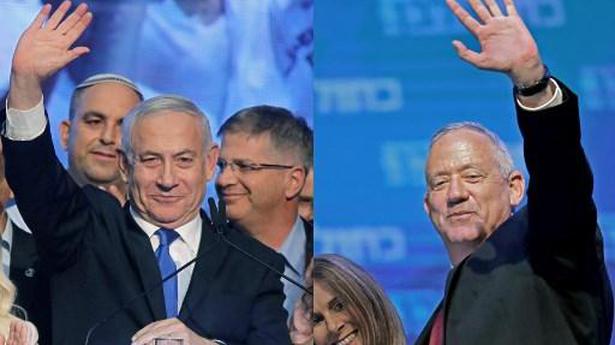 Israeli Prime Minister Benjamin Netanyahu and his main opponent Benny Gantz agreed to explore options for a unity government on September 23 as they met for the first time since last week’s election at the request of Israel’s president.

The key meeting came as the deadlocked vote results threatened Netanyahu’s long tenure in office, though he has shown no sign of being willing to give up his post. President Reuven Rivlin ushered both men into his office in Jerusalem around 8:00 pm (1700 GMT) after shaking their hands.

After roughly two hours, he left the two alone to meet before rejoining them again briefly. Gantz and Netanyahu issued a joint statement afterwards pledging that chief negotiators of the two parties would meet on September 24.

That will be followed by another meeting between Rivlin, Netanyahu and Gantz on September 25.

Rivlin, who has made clear he believes a unity government between their parties is needed to form a stable coalition, said: “We have taken a significant step forward tonight. The public does not want another election. They came out and voted,” Rivlin said in a statement, addressing Gantz and Netanyahu.

“Now it is your turn. The responsibility for establishing a government falls on you, and the people expect you to find a solution and to prevent further elections, even if it comes at a personal and even ideological cost.”

All sides agreed not to divulge further details of what was discussed. Rivlin called for the meeting after wrapping up consultations with political parties elected to parliament to hear their recommendations for who should form the next government.

Gantz’s centrist Blue and White alliance finished with 33 seats out of 120 in the September 17 elections, while Netanyahu’s right-wing Likud won 31. Despite Gantz’s slim lead, neither has a clear path to a majority coalition.

Both Netanyahu and Gantz, who had no previous political experience when he mounted his challenge to the premier, have backed calls for a unity government. Gantz, however, says he should lead it since his party is the largest, and a compromise seems a long way off.

The standoff has even raised the possibility of yet another election — which would be the third in a year after April polls also ended inconclusively with Netanyahu unable to form a governing coalition.

Earlier Monday, Netanyahu reiterated his call for Gantz to join him in a unity government, again acknowledging he was unable to form the right-wing coalition he hoped for.

“The only government that can be formed in these conditions is a united and large one between us,” Netanyahu said at a meeting of Likud lawmakers. “The only way to reach it is to sit down and talk.”

The end of the Netanyahu era would be an extraordinary moment in Israeli politics. He has been prime minister for a total of more than 13 years, the most in Israeli history. But he also faces potential corruption charges in the weeks ahead, pending a hearing set for early October.

The meeting at the president’s office followed a dramatic day on September 22, when Israeli Arab parties broke with longstanding precedent and said they were endorsing Gantz for prime minister. In announcing the move, the mainly Arab Joint List alliance said its decision was not meant as an endorsement of the policies of the ex-military chief, but as a way of helping oust Netanyahu.

Netanyahu has repeatedly been accused of political rhetoric and actions amounting to racism toward Israel’s Arab population. The Joint List won 13 seats in the election, making it the third-largest force in parliament.

Rivlin is expected to designate a candidate to try to form a government sometime after he receives final official election results on Wednesday. The timing of his announcement may depend on the progress of negotiations between Likud and Blue and White. The person chosen would then have 28 days to do so, with a possible two-week extension. If all attempts fail, Rivlin can then assign the task to someone else. In Rivlin’s consultations, Gantz received the endorsements of 54 parliament seats, while Netanyahu received 55.

Those totals do not include eight seats for ex-defence minister Avigdor Lieberman’s nationalist Yisrael Beitenu party, which has endorsed neither candidate for now and could emerge as a kingmaker. Gantz and Lieberman met on September 23, their first talks since the election.

“We exchanged opinions and viewpoints and if needed, will speak again in the future,” Gantz said in a statement.

The tally also does not include three seats for one of the Arab parties that unlike the rest of the Joint List alliance, did not agree to endorse Gantz.

Philippines’ Duterte warns China to back off disputed island

Philippine President Rodrigo Duterte has warned Beijing to back off from a disputed island in the South China Sea, warning of possible military action if China “touches” it amid rising tensions over the key waterway. Mr. Duterte, aiming to attract trade and investment from the Asian superpower, has mostly withheld his early criticism of Beijing’s […]

India and other members of the G4 bloc have reiterated their strong commitment to an early and comprehensive reform of the UN Security Council and called for result-oriented intergovernmental negotiations on it to make the top organ of the world body more effective in dealing with the complex global challenges on international peace and security. […]