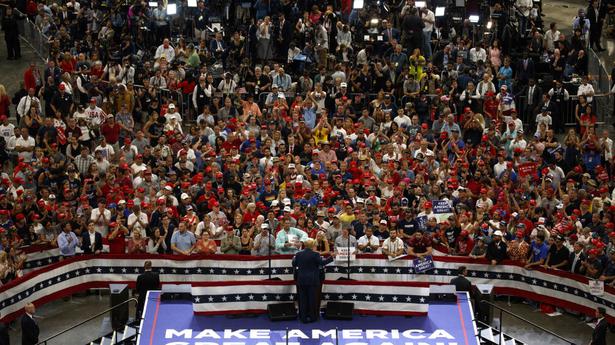 U.S. President Donald Trump launched his campaign with a rally in Orlando, Florida, focusing on themes that he has repeatedly touted during the first three years of his presidency.

Mr. Trump spoke for over an hour to a crowd of about 20,000 at the Amway Center, emphasising tried and tested themes — illegal immigration, an America-first policy, fake media, the economy, and a characterisation of himself and his base as victims of an increasingly leftist Democratic party trying to overturn the 2016 election results.

Supported by boos and chants from the crowd, Mr. Trump took shots at the media early on in his speech. A few minutes into the speech, the crowd chanted, “CNN sucks”, and laughed and clapped when Mr. Trump pointed to the media gallery and said, “By the way, that’s a lot of fake news back there…”

The President repeatedly returned to the theme of his base and himself taking back the country from an entrenched political class that “enriched itself” at the expense of the people.

“We did not merely transfer power from one party to another but we transferred power to you, the proud citizens of the Untied States of America,” he said, of his Inauguration Day in January 2017.

“We broke down the doors of Washington backrooms where deals were cut to close our companies, give away your jobs, shut down our factories and surrender your sovereignty and your very way of life… and we’ve ended it,” Mr. Trump said.

He said that he was “draining the swamp”, his trademark reference to the Washington political establishment, and that is why the swamp “was fighting back so viciously and violently”.

At one point in his speech, he called for a vote on whether to keep his 2016 campaign slogan, “Make America Great Again,” or to adopt a new one, “ Keep America Great,” [which won].

Mr. Trump railed against the Special Counsel Robert Mueller’s investigation into Russian meddling in the 2016 elections, calling it “a great hoax” and accused the Democrats of conducting a “witch hunt” to overturn the results of the 2016 election.

The crowd chanted, “Lock her up”, when Mr. Trump’s 2016 Democratic opponent Hilary Clinton was mentioned in this context.

Mr. Trump accused the Democrats of wanting to flood the country with illegal migrants in order to bolster their support base. He termed “morally reprehensible” the Democrat agenda of “open borders” [Democrats have not actually articulated “open borders” as a policy].

On Tuesday morning, in what critics say is a campaign ploy, Mr. Trump tweeted that immigration agents would, next week, begin “removing the millions of illegal aliens who have illicitly found their way into the United States.”

On trade and the economy, Mr. Trump talked about the low levels of unemployment, including for minorities and women. He talked about how he was taking on China, had replaced NAFTA with the USMCA [both trade deals with Canada and Mexico].

“By the way, those trade deals are getting very good folks, you will see,” he said.

Mr. Trump also denied that U.S. tariffs on Chinese imports were being passed on to Americans, arguing instead that China was subsidising its firms and had devalued its currency to cope with tariffs. “You’re not paying very much, if you’re paying at all, in the case of China,” he said. “And we are taking billions and billions of dollars in.”

Pakistan on Thursday pledged to contribute $3 million to the SAARC Coronavirus Emergency Fund proposed by Prime Minister Narendra Modi with an initial offer of $10 million from India to help combat the fast-spreading Covid-19 pandemic in the region. The Foreign Office in a statement said Pakistan’s perspective on the utilisation of fund was conveyed […]

World Swimming Championship, and other news in pictures

8: 00 am Chinese divers continued their dominance in World Swimming Championship Zhang Jiaqi and Lu Wei won the women’s 10-meter platform synchro event at the world swimming championships on Sunday as Chinese divers continued their dominance by claiming their fifth straight gold medal. Competing at their first world event, Zhang and Lu dominated the […]