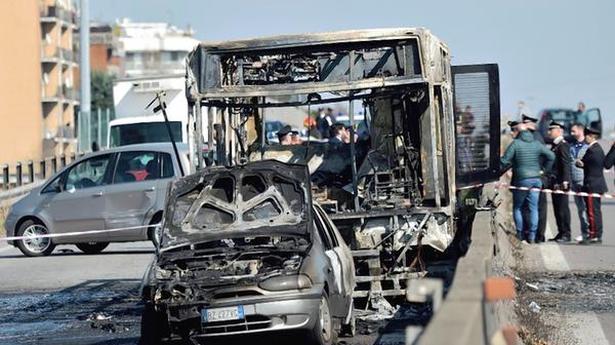 Italy was in shock on Thursday after the dramatic rescue of 51 children taken hostage by their school bus driver, who torched the vehicle in protest at Mediterranean migrant deaths.

The Italian driver of Senegalese origin on Wednesday hijacked the bus as it was taking the children from a gym to school in Crema, east of Milan.

Armed with two petrol canisters and a cigarette lighter, Ousseynou Sy threatened the youngsters, took their telephones and told the adults to tie them up with electric cable.

The 40-minute ordeal, during which the bus also slammed into a car, was brought to an end when police managed to smash windows open and get those onboard out just as the driver set fire to the vehicle. A dozen children and two adults were taken to hospital for smoke and fume inhalation, according to emergency services. The driver’s lawyer said his client had wanted to “draw attention to the consequences of (Italy’s) migration policies”.

Italy has clamped down on immigration under far-right Interior Minister Matteo Salvini. Police were alerted to the situation after one of the students held on the bus called them from his mobile phone.

The driver had no links with Islamist terrorism and “acted as a lone wolf”, Alberto Nobili, head of counter-terrorism at the Milan public prosecutor’s office, told a press conference.

Four people were killed in a car bombing in Somalia on Saturday that apparently targeted Turkish engineers working on a road near the capital Mogadishu, police and witnesses said. The attack was claimed by the Al-Qaeda-linked Islamist militant group Al-Shabaab, which has stepped up its activities in Somalia and neighbouring Kenya in recent weeks. The […]