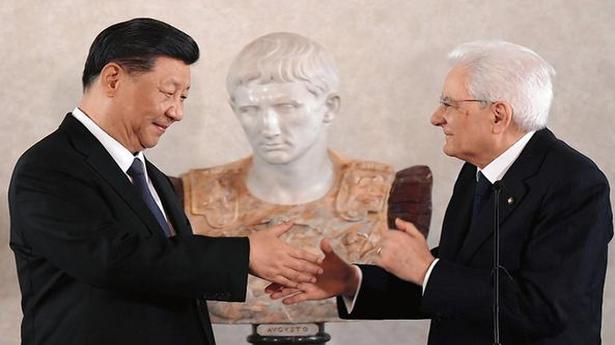 Italy and China want to revive the spirit of the ancient Silk Road by deepening their trade and investment ties, Chinese President Xi Jinping said on Friday during a trip to Rome that has raised eyebrows in Washington.

Mr. Xi is set to sign a deal on Saturday that will see Italy become the first member of the Group of Seven (G7) major industrialised nations to join China’s “Belt and Road” infrastructure project (BRI), which is inspired by historic, centuries-old trade routes.

Besides the BRI accord, various deals worth up to €7 billion ($7.9 billion) are expected to be agreed, including agreements opening up the northern ports of Trieste and Genoa to Chinese containers.

Italy’s populist government is eager for such initiatives to get underway swiftly as it battles to revitalise a sickly economy, which has slipped into its third recession in a decade.

Underscoring the warming bilateral ties, Italy offered Xi an extravagant welcome, with a cavalry phalanx escorting his limousine into the courtyard of the presidential palace — the sort of entry normally reserved for royalty.

He will later attend a state dinner in his honour, where Italian tenor Andrea Bocelli will sing for the 170 guests.

Italy’s decision to get closer to Beijing has caused concern amongst its Western allies — notably in Washington, where the White House National Security Council urged Rome not to give ”legitimacy to China’s infrastructure vanity project”.

Critics of the BRI say it is designed to bolster China’s political and military influence, bringing little reward to other nations, and warn that it could be used to spread technologies capable of spying on Western interests.

In an effort to allay such fears, Rome moved hastily this week to protect its telecoms sector from foreign predators, and the Italian president stressed on Friday that any deals had to be to advantageous to both countries.

“The Silk Road must be a two-way street and not only trade must travel along it, but also talent, ideas and knowledge,” Mattarella said, with Xi standing alongside him.

Mattarella also stressed the importance of safeguarding human rights but did not go into specific details. The U.S. State Department earlier this month slammed rights violations in China, saying the sort of abuses it had inflicted on its Muslim minorities had not been seen “since the 1930s.”

China denied the accusation as groundless and prejudiced.

Trump’s former chief strategist Steve Bannon is in Rome and called on the Italian government to rethink its position.

“I beseech the people of Italy to look at China’s predatory economic model before signing any deals,” he told reporters. ”The Chinese have a rapacious appetite for global domination.”

After leaving Italy on Sunday, Xi will travel to Monte Carlo and then on to Paris, where he will hold talks with French President Emmanuel Macron, German Chancellor Angela Merkel and European Union Commission President Jean-Claude Juncker.

Vaccine needed to fully halt spread of Covid-19: WHO

The World Health Organization (WHO) said on Monday that a safe and effective vaccine would be needed to fully halt the spread of Covid-19, which has killed more than 114,000 people worldwide. “Our global connectedness means the risk of re-introduction and resurgence of Covid-19 will continue,” WHO Director-General Tedros Adhanom Ghebreyesus told a virtual briefing […]

Singapore police are investigating a 32-year-old Indian national for holding a protest without a permit in Marina Bay against India’s contentious Citizenship Amendment Act (CAA). In Singapore, organising or participating in a public assembly without a police permit is illegal and constitutes an offence under the Public Order Act. “The man allegedly carried out the […]

U.S. agrees to delay tariff hike on some Chinese goods by 2 weeks

U.S. President Donald Trump said on Wednesday the United States has agreed to delay increasing tariffs on $250 billion worth of Chinese imports from Oct. 1 to Oct. 15 “as a gesture of good will.” Trump said the postponement came “at the request of the Vice Premier of China, Liu He, and due to the […]