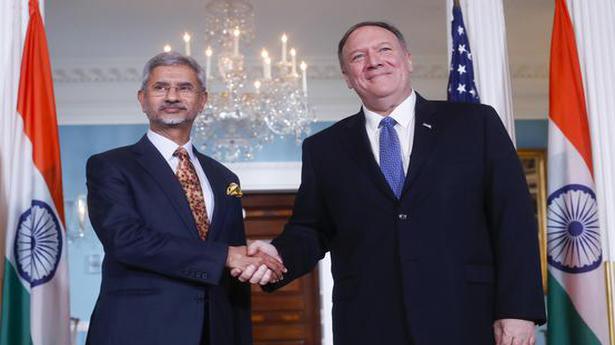 Asked if he is willing to accept U.S. sanctions for purchasing the S-400 missile defence shield from Russia, India’s External Affairs Minister S. Jaishankar said the decision has been communicated to the U.S. government.

India had decided in 2018 to purchase the surface-to-air S-400 Triumf for some $5.2 billion. India could be sanctioned under a 2017 U.S. law — the Countering America’s Adversaries Through Sanctions Act (CAATSA), which could kick in once the first payment for the S-400 is made. In 2018, the U.S. Congress authorised the U.S. President to grant a CAATSA waiver for countries that met certain conditions. However, U.S. officials have stressed, in 2019, that India should not presume it has an automatic waiver.

“India has made a decision on the S-400 and we have discussed that with the U.S. government,” Mr. Jaishankar said, adding, “I am reasonably convinced of the powers of my persuasion (sic).” The Minister was speaking at the Centre for Strategic and International Studies (CSIS), a Washington-based think tank.

“It would be my hope that people understand why this particular transaction is important for us, so I think of your question to me is hypothetical.”

Mr. Jaishankar was reiterating a position he stated on Monday, prior to his meeting with U.S. Secretary of State Mike Pompeo at the State Department.

“We have always maintained that what we buy — the sourcing of military equipment — is very much a sovereign right,” the AFP reported Mr. Jaishankar as saying on Monday.

“I don’t think Russia came up….I don’t recall it coming up,” Mr. Jaishankar told The Hindu on Monday afternoon when asked if he had discussed Russia at his Monday meeting with Mr. Pompeo.

The U.S. has removed Turkey, a NATO ally, from its F-35 fighter jet programme after Turkey received parts for the S-400 from Russia. While the sanctions on Turkey have not yet kicked in, they remain a possibility. Turkey plans to activate the S-400 systems in April 2020.

South Korea on Tuesday doubled a planned economic rescue package to 100 trillion won ($80 billion) to save companies hit by the coronavirus and put a floor under crashing stocks and bond markets. The package includes 29.1 trillion won in loans to small- and medium-sized companies, while another 20 trillion won will be used to […]

Hong Kong was in lockdown on Tuesday, with barricades in the city centre, shuttered stores and a heavy riot police presence, as authorities scrambled to ensure anti-government protests do not overshadow China’s anniversary festivities in Beijing. The former British colony has been wracked by nearly four months of street clashes and demonstrations, posing the gravest […]