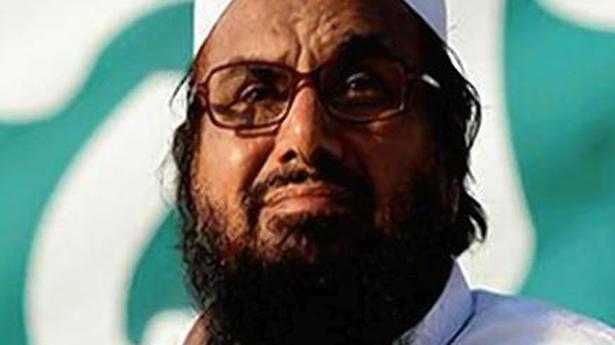 An anti-terrorism court (ATC) convicted Jamaat-ud-Dawa (JuD) chief Hafiz Saeed on terror financing charges on Wednesday in Lahore. An FIR against Saeed and his other associates was registered in July on charges of terror financing. The case was registered at the Counter-Terrorism Department (CTD) in Gujranwala. Saeed, Abdul Ghaffar, Hafiz Masood, Ameer Hamza and Malik Zafar Iqbal were indicted in December 2019.

Saeed has been convicted in two terror-financing cases under the Anti-Terrorism Act (ATA) Section 11-F (2) and 11-N. Section 11-F relates to “membership, support and meetings relating to a proscribed organisation” and its punishment is a sentence of maximum six months and fine. The verdict was announced by Judge Arshad Hussain Bhutta.

Hafiz Saeed has been sentenced to jail for five years and six months. He will be fined ₹15,000 in each case. It is the first time that Saeed has been formally convicted of an offence.

Soon after the verdict, Federal Minister for Economic Affairs Hammad Azhar tweeted: “Pak. remains committed to the earliest completion of its FATF Action Plan. FATF Plenary is a technical process. Irrespective of and without speculating on any final decision at the plenary, we look forward to acknowledgment of significant progress that Pak. authorities have made.”

The FATF meeting will take place later this month. Saeed is the alleged mastermind of the 2008 Mumbai attacks. He also has a bounty on his head worth $10 million by the U.S. government.

China on Sunday slammed officials from the U.S. and other countries for congratulating Taiwan President Tsai Ing-wen after she was re-elected with a landslide victory in a stunning rebuke of Beijing’s campaign to isolate the self-ruled island. Ms. Tsai, who had pitched herself as a defender of liberal democratic values against an increasingly authoritarian China, […]

Harvey Weinstein has been indicted on new sex crime charges in Los Angeles, just as his trial on separate rape and sexual assault charges in New York was poised to get underway, prosecutors announced Monday. The Hollywood mogul has been charged with raping one woman and sexually assaulting another in separate incidents over a two-day […]

Argentina’s ‘shirtless ones’ rise up against hunger, IMF and austerity

“This government does not represent us,” said Jacqueline Flores, one of the leaders of the Confederation of the Workers in the Popular Economy (CTEP). On a sunny September day, Ms. Flores was standing outside Argentina’s Congress building, in the midst of a protest against hunger. She was once a street vendor. As a young woman, […]