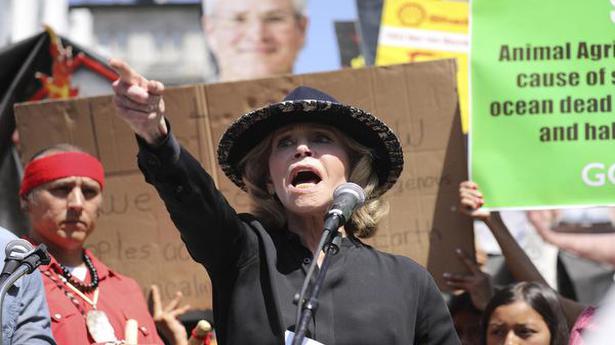 Veteran actor Jane Fonda was arrested by police outside the U.S. Capitol on Friday when she was participating in a climate change protest. The 81-year-old was among the 16 people who were taken into custody and later charged with “crowding, obstructing or incommoding.”

A video of Ms. Fonda being placed in handcuffs and escorted to a police vehicle was posted on social media. She was released hours later.

“The United States Capitol Police arrested 16 individuals for unlawfully demonstrating on the East Front of the US Capitol,” Eva Malecki, spokeswoman for the Capitol police told the outlet.

Prime Minister Boris Johnson began the third day in intensive care on Wednesday battling the coronavirus, which has struck at the heart of the British government, infected more than 55,000 people across the country and killed nearly 6,200. “I understand the prime minister is in a stable condition, he’s comfortable and in good spirits,” Edward […]

Without naming Pakistan, China on Monday said that the global campaign against terrorism under the framework of the Shanghai Cooperation Organisation (SCO) must be stepped up, but the intent is not to target any specific country. “In every summit, the institutional building of the SCO will be discussed that would involve economic cooperation and security […]

Apple is long—rumoured to be working on a new—generation wireless AirPods and if the latest reports are anything to go by, the AirPods Pro may launch at the end of this month. China Economic Daily reports that the new—generation device, dubbed Apple AirPods Pro, will boast a design upgrade with a new in—ear form factor. […]