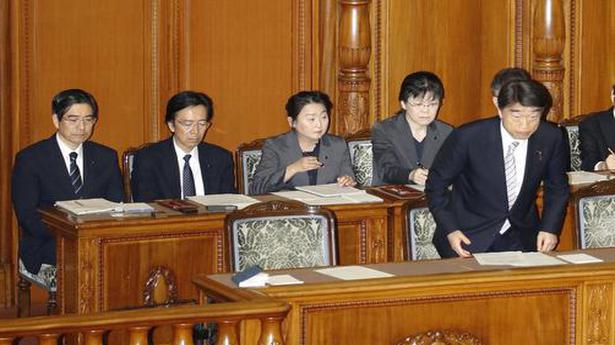 Japan’s government apologised Wednesday to tens of thousands of victims forcibly sterilized under a now-defunct Eugenics Protection Law, which was designed to “prevent the birth of poor-quality descendants,” and promised to pay compensation.

Chief Cabinet Secretary Yoshihide Suga said he was offering “sincere remorse and heartfelt apology” to the victims. It came after the Parliament earlier Wednesday enacted legislation to provide redress measures, including 3.2 million yen ($28,600) compensation for each victim.

An estimated 25,000 people were given unconsented sterilization while the 1948 Eugenics Protection Law was in place until 1996. The law allowed doctors to sterilize people with disabilities. It was quietly renamed as the Maternity Protection Law in 1996, when the discriminatory condition was removed.

The redress legislation acknowledges that many people were forced to have operations to remove their reproductive organs or radiation treatment to get sterilized, causing them tremendous pain mentally and physically.

Prime Minister Shinzo Abe, in his statement issued hours later, said the same problem should never be repeated. “We will do all we can to achieve a society where no one is discriminated against, whether they have illnesses or handicaps, and live together while respecting each other’s personality and individuality.”

The government had until recently maintained the sterilizations were legal at the time.

The apology and the redress law follow a series of lawsuits by victims who came forward recently after breaking decades of silence. That prompted lawmakers from both ruling and opposition parties to draft a compensation package to make amends for the victims.

The plaintiffs are seeking about 30 million yen each ($268,000) in growing legal actions that are spreading around the country, saying the government’s implementation of the law violated the victims’ right to self-determination, reproductive health and equality. They say the government redress measures are too small for their suffering.

In addition to the forced sterilizations, more than 8,000 others were sterilized with consent, though likely under pressure, while nearly 60,000 women had abortions because of hereditary illnesses. However, the redress law does not cover those who had to abort their pregnancy, according to Japan Federation of Bar Associations.

Among them were about 10,000 leprosy patients who had been confined in isolated institutions until 1996, when the leprosy prevention law was also abolished. The government has already offered compensation and an apology to them for its forced isolation policy.

The US ambassador to Sri Lanka said on Tuesday that some of the Islamist militants behind Easter Sunday bombings that killed more than 250 people were likely still at large and could be planning more attacks. Sri Lankan security forces also said they were maintaining a high level of alert amid intelligence reports that the […]

Trump goes out of his way to take a bow, again

It was wonderful news- Researchers reported earlier this week the largest-ever one-year decline in the U.S. cancer death rate during 2017. And President Donald Trump didn’t miss the chance to take a bow. Mr. Trump tweeted- “U.S. Cancer Death Rate Lowest In Recorded History! A lot of good news coming out of this Administration.” While […]