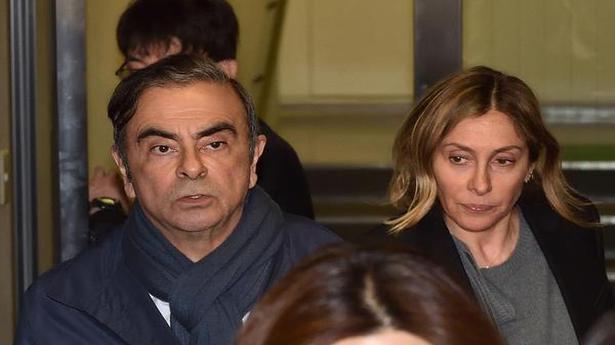 Japanese prosecutors on Tuesday issued an arrest warrant for Carlos Ghosn’s wife for alleged perjury, as officials stepped up efforts to bring the fugitive car industry boss back to face trial on financial misconduct charges.

The former Nissan Motor, and Renault chairman fled to Lebanon last month from Japan, where he has alleged there was a government-backed coup to oust him.

A senior Japanese Ministry of Justice official said staff were poring over Lebanese laws to find a way to bring back Ghosn and that Japan “will do whatever it can” to put him on trial.

In Beirut, the justice minister confirmed that prosecutors had received a “red notice” arrest warrant from Interpol in respect of Ghosn and would take the necessary action.

The ministry said nothing had been received from Japanese prosecutors relating to an arrest warrant for his wife, Carole, who is in the Lebanese capital.

The Japanese warrant accuses her of falsely claiming not to know, or to have met, people connected to a company that received payments from Nissan Motor, part of which it subsequently transferred to a firm owned by Ghosn.

Japan’s ambassador to Lebanon, Takeshi Okubo, met President Michel Aoun on Tuesday to request “greater co-operation on this in order to avoid negative repercussions for our friendly relations”, according to Aoun’s office.

Ghosn is scheduled to hold a news conference on Wednesday, his first such appearance since his arrest in November 2018 and his dramatic flight to Lebanon, his childhood home. .

“Last time Carlos Ghosn announced a press conference and got re-arrested. This time, the day before he is announced to speak out freely for the first time, they issued an arrest warrant for his wife Carole Ghosn,” a spokeswoman for Ghosn told Reuters in Beirut. “The issuance of this warrant is pathetic.”

Ghosn is expected to detail some of the claims he has made against Nissan since his arrest.

Citing an interview with Ghosn, Fox Business reported that he said he has “actual evidence” and documents to show there was a Japanese government-backed coup to “take him out”. He plans to identify those he believes responsible, the broadcaster said.

In earlier court filings seen by Reuters and statements released by his lawyers, Ghosn says he was unseated to destroy any possibility of a merger between Nissan and Renault, accusing Nissan executives of colluding with prosecutors and Ministry of Economy, Trade and Industry officials.

Nissan said that despite Ghosn’s flight from Japan the company still held him responsible for “serious misconduct”.

“The company will continue to take appropriate legal action to hold Ghosn accountable for the harm that his misconduct has caused to Nissan,” the automaker said in a statement.

Japan’s Chief Cabinet Secretary, Yoshihide Suga, on Tuesday described Ghosn’s escape to Beirut via Istanbul as “regrettable” and said Tokyo had asked Lebanon for help. “It’s necessary to carefully consider the legal systems of both countries,” he told a news conference.

Lebanon does not normally extradite its citizens.

Turkish-based MNG Jet, operator of the private planes Ghosn used to escape, said half of the $350,000 flight contract was paid from Dubai by a company called Al Nitaq Al Akhadar, which it did not know.

MNG said last week it was not aware Ghosn used its jets and has blamed an employee it said falsified documents to transport him from Osaka to Beirut. (Reporting by Tim Kelly, Makiko Yamazaki, Chang-Ran Kim, Chris Gallagher, David Dolan, Junko Fujita and Sam Nussey in Tokyo, Samia Nakhoul and Eric Knecht in Beirut, and Jonathan Spicer in Istanbul; Editing by Shri Navaratnam, Christopher Cushing and Giles Elgood)

Former Malaysian Prime Minister Najib Razak’s second corruption trial has started, with a prosecutor alleging he pilfered billions of dollars from the 1MDB state investment fund through an “elaborate charade” and then sought to cover his tracks. Chief prosecutor Gopal Sri Ram says the prosecution would show how Najib took steps to channel 1MDB money […]

British travel firm Thomas Cook collapsed into bankruptcy on September 23, leaving some 6,00,000 holidaymakers stranded and sparking the U.K.’s biggest repatriation since World War II. The 178-year-old debt-plagued group, which had struggled against fierce online competition for some time and blamed Brexit uncertainty for a recent drop in bookings, failed to secure 200 million […]

New Zealand confirmed its first case of COVID-19 on Friday in someone who returned from Iran, but said the chances of a community outbreak remains low. The patient — in their 60s — tested positive for COVID-19 earlier in the day. The person is being treated in Auckland City Hospital and their condition is improving, […]