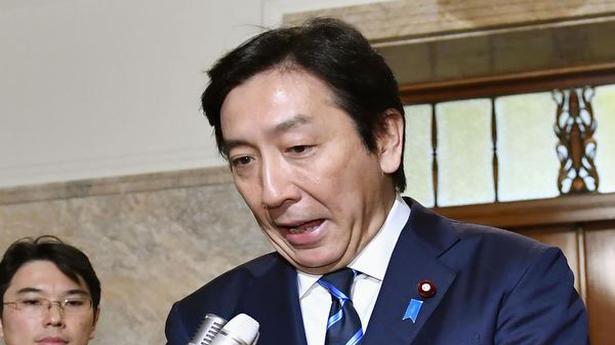 Japan’s trade minister resigned Friday a month into his job in a scandal over condolence money, expensive melons and other gifts allegedly offered to election supporters.

Prime Minister Shinzo Abe said he had accepted Isshu Sugawara’s offer to resign and replaced him with Hiroshi Kajiyama, formerly the minister in charge of local revitalization and regulatory reform.

“I bear responsibility for his appointment and I apologize to the people for causing a situation like this,” Mr. Abe told reporters.

Mr. Abe said Mr. Sugawara tendered his resignation because he did not want to hold up important discussions in Parliament over his scandal.

Mr. Sugawara’s resignation comes just weeks after Abe added him to the Cabinet in a reshuffling prompted by the July election, in which his ruling coalition secured a comfortable majority.

Mr. Sugawara has been grilled in Parliament recently after a magazine reported earlier that he had paid condolence money and sent expensive melons, crab and other gifts to his election district supporters. Such payments are considered donations that are against Japanese elections law.

Another magazine article on Thursday provided more details of his alleged giveaways to his election supporters in his constituency in Tokyo, apparently triggering his decision to offer his resignation.

Mr. Sugawara denied paying cash to voters but has flip-flopped on other details.

Mr. Sugawara told reporters he regretted he had to step down in the middle of his term and leave work unfinished. He said the condolence money was presented to supporters by his aide, and that he will fully investigate and clarify.

Mr. Abe took office in December 2012 and is set to be the longest serving prime minister in Japanese postwar history next month. He has managed to shake off various scandals, partly because of an opposition that is divided and unpopular.

UN Secretary General Antonio Guterres has appealed to India and Pakistan to “exercise maximum restraint” to ensure that the situation does not further deteriorate, his spokesperson Stephane Dujarric said, amid sudden spike in tensions between the two neighbours. “The UN Military Observer Group in India and Pakistan (UNMOGIP) observed and reported an increase in military […]

The Taliban said the U.S. “will be harmed more than anyone” but left the door open for future negotiations on Sunday after President Donald Trump abruptly announced that he had called off year-long talks to end America’s longest war. “We still… believe that the American side will come back to this position… Our fight for […]

A fire at a Moscow hospital treating people infected by the new coronavirus killed one patient and forced the evacuation of about 200 others.Also rea Source: thehindu.com Related