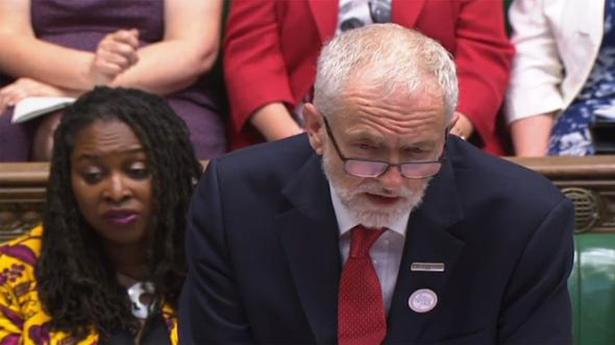 Jeremy Corbyn urged anti-Boris Johnson MPs to make him Britain’s caretaker Prime Minister to avoid a no-deal Brexit — but his proposal met with a mixed response on Thursday.

The Labour main opposition leader said once in power, he would seek to delay Britain’s October 31 exit date from the European Union and then call a general election.

Mr. Corbyn — the only person who can trigger a vote of no confidence in Prime Minister Johnson’s government — will do so after MPs return to Parliament on September 3, if he feels sure of victory.

Conservative PM Johnson has pledged to take Britain out of the EU on October 31, without a divorce deal if one cannot be agreed with Brussels.

In a letter to other opposition leaders and leading rebel Conservatives, Mr. Corbyn said his plan “can halt the serious threat of no deal, end the uncertainty and disarray, and allow the public to decide the best way ahead”.

While the Scottish Nationalists, the second-biggest opposition party in Parliament, welcomed the idea, the Liberal Democrats, the next-biggest, dismissed it as “nonsense”, saying Mr. Corbyn could not lead the charge.

Death toll in east Indonesia earthquake rises to 30, many still in shelters

The death toll from a strong earthquake in Indonesia’s eastern province of Maluku has risen to 30 people, the national disaster mitigation agency (BNBP) said on September 29, and hundreds of thousands of people remain in evacuation shelters. The 6.5 magnitude quake hit early on September 26, damaging hundreds of houses and dozens of public […]