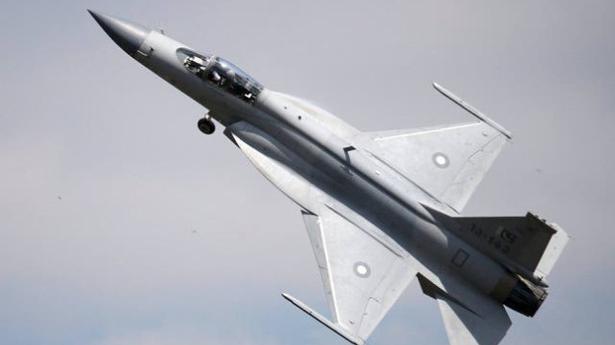 Pakistan’s military has said it used JF-17 Thunder combat aircraft developed jointly with China were used in the retaliation operation against India, and not U.S. -made F16s as claimed by the neighbour.

A day after Pakistan’s attempt to retaliate the Indian Air Force’s air strikes at a Jaish-e-Mohammed terror camp in Balakot, the Indian armed forces displayed parts of an AIM-120 AMRAAM (Advanced Medium-Range Air-to-Air Missile) fired by an F-16, which fell in Indian territory. New Delhi had also underlined that electronic signatures captured by Indian radars had established the use of F-16 for the offensive.

The US State Department announced that it was seeking more information from Pakistan on the potential use of American-made F-16 jets against India in violation of the end-user agreement.

“The aircraft which engaged those targets and fought them were JF-17. As regard to how to use F-16, in what context [they] were used or not — because at that point of time our entire Air Force was airborne — now it remains between Pakistan and the US to see how the MoUs regarding the use of F-16 have been adhered to or otherwise,” Major General Ghafoor told Russian news agency Sputnik International.

He noted that Islamabad was discussing the use of its JF-17 with the United States citing “friendly relations” with Washington, stressing, however, that the country would use whatever it deemed necessary if it came to “legitimate self-defence.”

Major General Ghafoor said that Pakistan’s nuclear arsenal is a deterrence tool to prevent wars in the region.

“Pakistan holds the position that this capability eliminates the possibility of conventional war. No sane country having this capability would talk about using it,” Radio Pakistan quoted Major General Ghafoor as saying in an interview with the Russian News agency

He said the Pakistan would take steps towards non-proliferation of nuclear arms but only if India does the same.

Major General Ghafoor said Pakistan would welcome every effort, including that of Russia, which can bring peace in the region.

Pakistan’s defence ties with Russia have moved past the bitter Cold War hostilities in recent years and the chill in the relations between Pakistan and the US has further pushed the country towards Russia and China.

No room for dissent in Putin’s Russia

In what has emerged as yet another case of the state cracking down on anti-government activism, a court in the central Russian city of Penza has sentenced seven members of a left-wing activist group ‘Set’ (Network) to a cumulative term of 86 years. Dmitriy Pchelintsev, 27, received the harshest sentence — 18 years in a […]

The U.S. has noted Pakistan’s recent action against terrorists and terror organizations, including the detention of 44 individuals connected to terror groups, but wants to see sustained and irreversible action. “…The United States notes these steps and we continue to urge Pakistan to take sustained, irreversible action against terrorist groups that will prevent future attacks […]

Two women were arrested in Florida after police opened fire on them for running two security checkpoints near Mar-a-Lago on Friday in a car chase that was unrelated to U.S. President Donald Trump’s resort, officials said. Trump was in Washington at the time, but was scheduled to leave for his Palm Beach resort later on […]