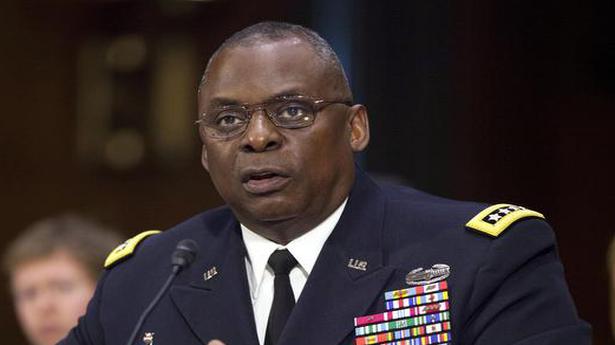 U.S. President-Elect Joe Biden is expected to nominate retired General Lloyd Austin as his Defence Secretary according to reports, making Gen. Austin the first African American in the post, if he is confirmed by the Senate.

In choosing Gen. Austin, Mr. Biden has passed over contenders for the job, such as former Secretary of Homeland Security Jeh Johnson and Pentagon official Michèle Flournoy.

Mr. Biden could announce his nomination of the 67-year-old four star general on Tuesday, as per Politico, which first reported the story. Gen. Austin formerly headed the U.S. Central Command overseeing combat in Afghanistan, Iraq, Yemen and Syria. Gen. Austin oversaw the U.S. response to the rise of the Islamic State (IS) — including a $ 500 million failed programme to recruit Syrian fighters against IS — and the withdrawal of U.S. troops from Iraq.

U.S. law requires a seven-year cool-off period from the army before becoming Defence Secretary — Gen. Austin will need a waiver from the U.S. Congress if he is to be confirmed to the position. If that happens, it will be the second time in recent history with U.S. President Donald Trump having got a waiver for his nomination Jim Mattis, who became Defence Secretary in 2017.

Several analysts took to social media to criticise the nomination of a former military officer for a civilian role.

“From a civil-military relations perspective, this seems like a terrible idea,” Georgetown University an academic and former Pentagon official Rosa Brooks said on Twitter. “Lots of damage during the Trump era. Especially after Mattis, Kelly, McMaster, Flynn…. putting a recently retired 4 star, no matter how wonderful, into the top civilian DoD position sends the worst possible message.”

Some also criticised the fact that Gen. Austin had joined the board of arms manufacturer Raytheon after retirement.

“OH COME ON. A General and Raytheon board?” Danielle Brian, who heads the Project on Government Oversight, said on Twitter. “Possibly the worst of all options. Bad news for civilian control and any real distance from the military-industrial-complex,” she said.

Pakistan on Wednesday summoned the Indian High Commissioner Ajay Bisaria to lodge a protest against the acquittal of all four accused, including Aseemanand in the 2007 Samjhauta terror attacks that left 68 people, mostly Pakistanis, dead. Pakistan’s Acting Foreign Secretary, in a statement, said that Pakistan had consistently raised the “lack of progress and the […]

The World Health Organization (WHO) on Tuesday warned of a global shortage and price gouging for protective equipment to fight the fast-spreading coronavirus and asked companies and governments to increase production by 40% as the death toll from the respiratory illness mounted. Meanwhile, the U.S. Federal Reserve cut interest rates on Tuesday in an emergency […]