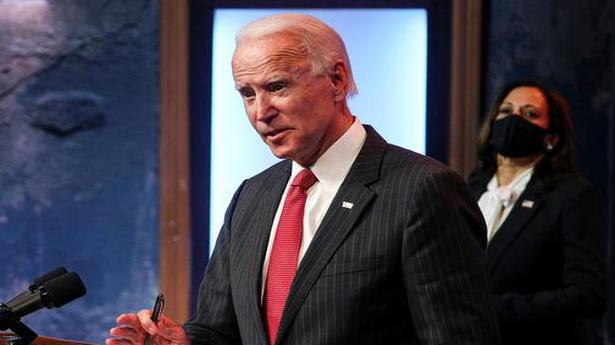 Joe Biden, working in his home state of Delaware, has announced a series of selections for White House posts.

U.S. President-elect Joe Biden will announce the first of his Cabinet appointments on Tuesday and is planning for a scaled-down inauguration due to the coronavirus pandemic, aides said on Sunday, as he lays the foundation for his new administration despite President Donald Trump’s refusal to concede.

Since Mr. Biden, a Democrat, was declared the winner of the November 3 election two weeks ago, the Republican President has launched a barrage of lawsuits and mounted a pressure campaign to prevent state officials from certifying their vote totals, suffering another emphatic legal setback on Saturday in Pennsylvania.

“I hope that the administrator of the GSA will do her job,” Mr. Klain added, referring to GSA chief Emily Murphy.

Mr. Biden is due to take office on January 20.

“A record number of Americans rejected the Trump presidency, and since then Donald Trump’s been rejecting democracy,” Mr. Klain told ABC’s “This Week” program.

Mr. Biden, working in his home state of Delaware, has announced a series of selections for White House posts. Mr. Klain said that ”you’re going to see the first Cabinet picks this Tuesday,” but declined to reveal the choices or the posts to be filled.

Mr. Biden allies also indicated he could announce his selection for secretary of state as soon as this week, with former national security adviser Susan Rice and veteran diplomat Antony Blinken seen as among the candidates.

Mr. Klain said there will be “scaled-down versions of the existing traditions” for Mr. Biden’s inauguration. Inauguration ceremonies and related events typically draw huge crowds to Washington. COVID-19 cases and deaths are surging in many parts of the country amid a pandemic that has killed about 256,000 Americans.

“We know people want to celebrate. There is something here to celebrate,” Mr. Klain said. “We just want to try to find a way to do it as safely as possible.”

Critics of Mr. Trump, including Democrats and some Republicans, have accused him of trying to undermine faith in the American electoral system and delegitimize Mr. Biden’s victory by promoting false claims of widespread voter fraud.

“Fight hard Republicans,” Mr. Trump wrote on Twitter on Sunday morning as he pressed his unsubstantiated narrative of voter fraud before playing golf in Virginia for a second day in a row.

Mr. Trump’s campaign said on Sunday that it was appealing Brann’s decision to the U.S. Third Circuit Court of Appeals. Pennsylvania is expected to certify its election results on Monday.

Trump’s campaign has also filed a petition for another recount in Georgia. A previous laborious hand recount reaffirmed Biden’s victory by a margin of more than 12,000 votes in the southern state, a longtime Republican bastion in presidential elections.

Some of Mr. Trump’s fellow Republicans in Congress are now breaking ranks though many, including the most senior ones, have not.

“We’re beginning to look like a banana republic,” Maryland’s Republican Governor Larry Hogan told CNN’s “State of the Union” program, criticizing the refusal of many in his own party to acknowledge Trump’s defeat. “Frankly I’m embarrassed that more people in the party aren’t speaking up.”

Republican Senator Kevin Cramer told NBC’s “Meet the Press” program that the start of the presidential transition process is overdue, though he declined to recognize Mr. Biden’s victory.

“I hope they would start to accept the reality,” Mr. Klain said of Republican leaders.

Critics have said Mr. Trump’s refusal to facilitate an orderly transition carries serious implications for national security and the fight against COVID-19.

Mr. Klain said Mr. Biden is being denied intelligence briefings to which he is entitled, FBI background checks on potential Cabinet nominees, and access to agency officials to help develop plans including avoiding delays in COVID-19 vaccine rollout.

Jen Psaki, a senior advisor to Biden’s transition team, said on CNN’s “State of the Union” that legal action to compel the GSA to recognize Biden “isn’t our preference.”

The rally was expected to be the largest indoor gathering in the world during the pandemic Source: thehindu.com Related

With galleries shut due to COVID-19, Brazil hosts a drive-thru art show