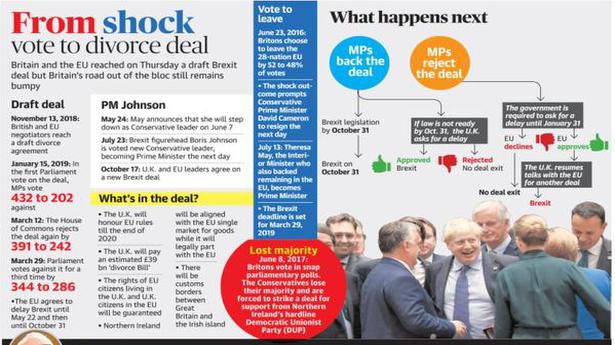 Prime Minister Boris Johnson Johnson on Thursday urged MPs “to come together” and support his “excellent” Brexit deal without any more delay.

But he is facing a desperate scramble for votes to pass the deal in Parliament, as his Conservative government is well short of a majority.

MPs will debate his new agreement at a rare weekend sitting of Parliament — only the fifth time since 1939 there has been a Saturday session in Parliament.

Mr. Johnson’s chances hinge on what four key groups decide to do. They are — the Conservatives’ Democratic Unionist Party allies from Northern Ireland; the European Research Group (ERG) of hardcore Conservative eurosceptics; expelled anti-no deal Conservatives; and Brexit-reconciled Labour MPs. The DUP has already rejected the new deal and the ERG tends to follow their lead.

The House of Commons has 650 seats. But in practice there are 639 votes up for grabs. The seven MPs from the Irish republican party, Sinn Fein, do not take their seats, while the speaker and his three deputies — two Labour MPs and one Conservative — do not vote.

That means 320 votes are needed for an absolute majority. Support for the deal that Mr. Johnson’s predecessor Theresa May struck with Brussels peaked at 286 at the third time of asking.

There are now a maximum 287 Conservative votes — if the ERG faction backs the new deal.

The DUP allies command 10 votes — but the Northern Irish party has said they cannot support the new deal.

Dom Walsh, a policy analyst, said that without DUP support, the numbers were now “very, very tight”. “It’s theoretically possible to get a deal through without the DUP, but staggeringly unlikely,” he tweeted.

By his calculations, Mr. Johnson would need to convince every ERG rebel, every former Conservative who voted for Ms. May’s deal (19), every Labour and independent MP who did so (nine) plus five extra Labour MPs — just to get a majority of one.

Mr. Johnson had ousted 21 Conservatives for voting against the government to stop a no-deal Brexit. “They don’t owe Johnson anything and have burned their bridges. But most of them wanted a deal and voted for one, and left to avoid no deal,” said Tim Bale, the deputy director of The U.K. in a Changing Europe, a think-tank.

India has blocked Masood Khan, the President of Pakistan-occupied Kashmir (PoK) from attending an event in the Lower House of the French Parliament. According to sources, Masood Khan was supposed to address French parliamentarians at the event organised by the Pakistan Embassy in France. The Indian mission in Paris issued a demarche and urged the […]

Determined to keep Parliament functional during the COVID-19 outbreak, Maldivian legislators on Monday convened online for a crucial session to discuss strategies to combat the pandemic. As many as 71 of the 87-member House logged in on Monday using a web conferencing facility, appreciating the need for physical distancing. “Even though we are confined to […]

Since the March 15 terror attack in Christchurch, New Zealand, where a far-right extremist killed 50 people in mosques, media focus has shifted to such groups operating in Europe. One such group is the Identitarian Movement, known for its radical “activism” against Muslims, migrants, refugees and other minorities. While the movement calls itself a “patriotic […]