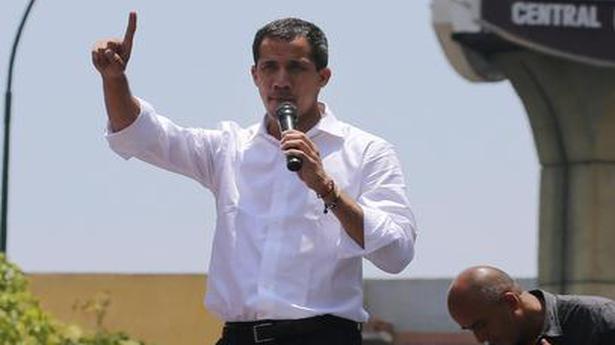 Venezuelan Opposition leader Juan Guaidó on Thursday called for peaceful demonstrations at Army bases, days after a military uprising in support of his bid to oust President Nicolás Maduro fizzled out.

The latest appeal came after Mr. Maduro called on the armed forces of the crisis-wracked nation to oppose “any coup plotter”.

In a tweet, Mr. Guaidó asked supporters to gather for peaceful demonstrations on Saturday at military bases in a bid to get soldiers to “support the Constitution”.

Meanwhile, Venezuela’s Supreme Court ordered the re-arrest of influential Opposition figure Leopoldo López — who made a dramatic appearance alongside Mr. Guaidó on Tuesday after he was freed from house arrest.

Mr. López has since taken refuge at the Spanish Embassy. Madrid has said it would not hand Mr. López over to Venezuelan authorities.

U.S. President Donald Trump warned in an interview that Washington has “lots of options.”. “There’s always a tipping point” for military intervention, he said, while adding: “I’d rather not do that.”

Pregnant black lawmaker claims she was abused at U.S. store

A pregnant African-American lawmaker in Georgia said she was verbally attacked in a supermarket on Friday by a middle-aged white man who used profanity, called her vulgar names and told her to “go back where you came from” as her nine-year-old daughter looked on. Representative Erica Thomas, a Democrat from Austell, said the man was […]

Standing over the still body of an intubated 5-year-old boy wearing nothing but a plastic diaper, an Iranian health care worker in a hazmat suit and mask begged the public for just one thing — Stop drinking industrial alcohol over fears about the new coronavirus. The boy, now blind after his parents gave him toxic […]

Under Phase I of the Vande Bharat Mission , the government evacuated a total of 6,527 Indians from the Gulf region and from countries like the U.S., the U.K., the Philippines, Bangladesh, Malaysia and the Maldives. Source: thehindu.com Related