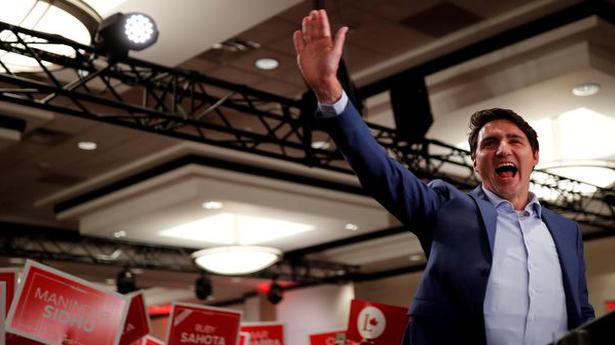 Canadian Prime Minister Justin Trudeau donned an armored vest and appeared with a heavy security detail at a major election rally on Saturday.

Officials would not reveal the nature of the threat. It resulted in a 90-minute delay before Mr. Trudeau appeared before about 2,000 supporters who had turned out as the election campaign ahead of the Oct. 21 vote.

Mr. Trudeau wore a suit jacket rather than his usual rolled-up sleeves and loosened tie, and was wearing a vest, which was noticeable in photos taken at the event.

Mr. Trudeau was escorted through crowd by a large number of plainclothes Royal Canadian Mounted Police officers as well as Mounties dressed in green tactical gear.

RCMP spokeswoman Stephanie Dumoulin said for security reasons they do not comment on security measures given to the prime minister. A spokeswoman of Trudeau also declined comment.

Prepared remarks had indicated that Mr. Trudeau’s wife, Sophie Gregoire Trudeau, was to introduce the Liberal leader. She did not appear or take the stage during the rally.

“Very upsetting to hear that Justin Trudeau had to wear a bulletproof vest tonight at a campaign event,” opposition Conservative leader Andrew Scheer tweeted. “Threats of violence against political leaders have absolutely no place in our democracy.”

Opposition NDP Leader Jagmeet Singh was the first to tweet his concern.

“Any threat made against JustinTrudeau, or any leader, is troubling to all of us,” he wrote. “No matter how you vote or believe, no one should face threats of violence. To the officers who protect all of us – thank you.”

Hong Kong leader Carrie Lam was forced to abandon her annual policy address on Wednesday after some lawmakers jeered as she began speaking, causing an unprecedented cancellation of such a speech in the legislature of the Chinese-ruled city. Ms. Lam, who has rejected calls to stand down, had been set to announce a raft of […]

Bolton’s book about his time as national security adviser was originally scheduled to come out in March, but was postponed to May, pending a government security review. Meanwhile, The Room Where It Happened has apparently grown longer. It was originally listed as 528 pages, but is now 576 pages, according to the retailer and publisher […]

Macau on January 22 reported its first confirmed case of the new SARS-like coronavirus as authorities announced all staff in the city’s bustling casinos had been ordered to wear face masks. The former Portuguese colony is a huge draw for mainland tourists as the only place in China that allows gambling. With the Lunar New […]