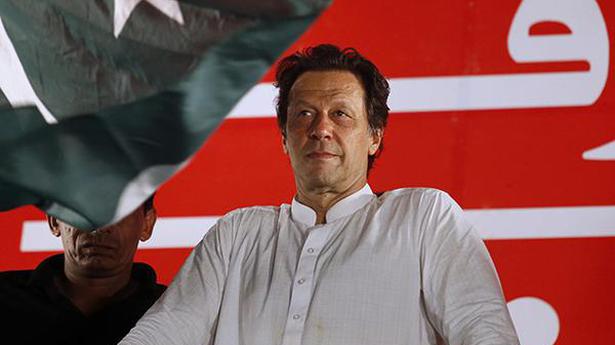 For the fourth time in less than two months, Pakistani Prime Minister Imran Khan’s comments on the peace process have not only made the Afghan government protest, but also caused outrage among Afghans across the political spectrum.

In the first week of April, during a rally in the Khyber Pakhtunkhwa region of Pakistan, Mr. Khan reiterated an earlier comment that he termed a “brotherly advice” to Afghanistan — he sought the formation of an interim government to negotiate peace with the Taliban in the war-torn country.

In response, the Afghan Foreign Ministry summoned a Pakistani envoy, seeking an explanation for Mr. Khan’s remarks. “These remarks are against good neighbourly relations and international law. We always protest against such comments. Pakistan’s leadership has to respect Afghanistan as a sovereign and independent country. We hope they will change their mind,” Sibghatullah Ahmadi, spokesperson at the Afghan Ministry of Foreign Affairs, told the media on Monday.

Mr. Khan had made a similar comment in an interview with Express Tribune that was published in March, where he had blamed the Afghan government over what he perceived as a failure of the talks process.

Earlier in the same month, at a rally in Bajaur in northwestern Pakistan, Mr. Khan assured the locals there that a “good government will come in Afghanistan” — remarks that were not taken too kindly by the Afghan government.

In February, Afghanistan sent a letter to the UN Security Council, raising concerns on a scheduled meeting between the Pakistani government and the insurgent group. Tensions later escalated to the extent of Afghanistan recalling its Ambassador Atif Mashal from Pakistan.

Mr. Khan’s most recent comments have also received an extremely strong backlash from the Afghans. “Imran Khan’s repeated interferences in Afghanistan’s internal affairs is a grave violation of the United Nations Charter. All nations must respect our sovereignty,” stressed Spozhmai Stanikzai, a former Afghan diplomat, to this writer.

“We all must respect our Constitution, which is the supreme law of Afghanistan, and allow our legitimate government to decide about such issues,” she urged.

Like many Afghans, Mr. Stanikzai strongly protested the idea of an interim government, fearing that it will affect the gains and developments made in the last 18 years after the fall of the Taliban regime in 2001.

“The proposed interim government will have all parties in the government, including the Taliban, who are under the control of Pakistan’s leadership. Such a set-up is a win for Pakistan and the U.S. and a loss for Afghanistan,” he said, urging all Afghan parties to stand against the proposal.

“At one level, it reveals the real intention of Pakistan — to have a destabilised Afghanistan and a weak government there so that the Pakistan military and the ISI could have a sway over Kabul, however untenable that may be. At another level, it also reveals a growing nervousness in Pakistani leadership about the peace process actually succeeding and not playing according to [its] script, hence these attempts to muddy the waters,” he said.

“India is quite clear in its support for democracy and its institutions built painstakingly over the last 17 years and would not want that the baby is thrown out with the bathwater,” Mr. Sinha added. “This is about nation-building that happens incrementally. It is not a game of snakes and ladders that each time you start from scratch,” he added.

Ruchi Kumar is a freelance journalist based in Kabul.

The United Auto Workers (UAW) went on strike at General Motors just after midnight on Sunday and about 48,000 hourly workers at its facilities are headed for the picket lines in the morning, union officials said early on Monday. U.S. labor contract talks reached an impasse on Sunday, the and the UAW called for the […]

France’s president warned fellow European countries on Thursday that NATO was dying, citing a lack of coordination and U.S. unpredictability under President Donald Trump, comments quickly rejected as “drastic” by the German chancellor. In an interview with British weekly The Economist, Emmanuel Macron expressed doubt about U.S.-led NATO’s security maxim that an attack on one […]

Julian Assange sentenced to 50 weeks in prison for bail breach

WikiLeaks founder Julian Assange was sentenced on Wednesday to 50 weeks in jail for breaching a British court order seven years ago, when he took refuge in Ecuador’s London embassy to avoid extradition to Sweden. The Australian whistleblower, who was arrested on April 11 after Ecuador gave him up, will serve the nearly one-year sentence […]