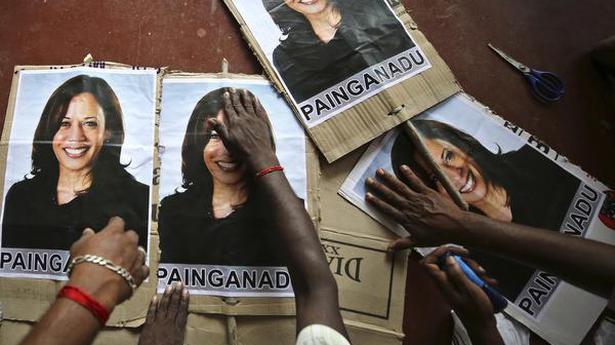 Kamala Harris will speak out on issues that are important to her, said the maternal uncle of the Vice President Elect of the United States. Speaking to The Hindu, G. Balachandran, policy commentator and technology expert said that Ms. Harris was raised by her mother Shyamala Gopalan Harris who participated in the civil rights movement in the 1960s and she may choose to speak out on human rights related issues in India. Mr. Balachandran has worked in Chennai as The Hindu’s Development Correspondent, between 1978 and 1984.

“She will speak out if she is moved by something. You may not want her to say that but she will say, ‘I am sorry but I will have to say this’,” said Mr. Balachandran. He pointed out that Ms. Harris would not keep quiet if she finds something happening in India that she disagrees with.

He maintained that she draws from the rich legacy of civil rights championed by her mother Shyamala Gopalan Harris, a biomedical scientist, who left a strong impression on her daughter. “Shyamala contributed immensely to the legacy of human rights in the United States. Her contribution on that front is much greater than that of Kamala’s,” said Mr. Balachandran, who has also worked as a consultant at the Manohar Parrikar Institute for Defence Studies and Analyses. He maintained that the election result has sent a message of hope to the world.

The Biden-Harris campaign had maintained that India should restore civil and political rights in Kashmir and Ms. Harris had indicated her disapproval after August 5, 2019 decision on ending the special status of Jammu and Kashmir. When asked about the issue, Ms. Harris had said last year, “We are all watching”.

Mr. Balachandran hinted that his niece could speak on the present situation in Kashmir as well. “Do not think that just because India has done something, she would keep quiet on that. She has spoken on issues like Kashmir earlier,” he reminded. Speaking out on issues of global relevance will be the hallmark of the Biden-Harris administration as the election mandate is for bringing the United States into the global mainstream as opposed to the policy of President Donald Trump who had withdrawn the United States from many of the international and multilateral obligations.

Also read: ‘I may be the first, but won’t be the last’: Kamala Harris in her first speech as VP-elect

“The result is inspiring a lot of people all over the world because it indicates that the United States will return to the global mainstream which is a good thing,” Mr. Balachandran said, adding that the entire Indian part of Ms. Harris’s family is planning to attend the swearing-in ceremony on January 20.

“I attended the swearing-in ceremony when she became a Senator and I will be in Washington DC this time as well. All of us will be there when she takes the oath of office,” he said. He said his late sister who passed away in 2009 had lived an exemplary life and her contribution on the civil rights arena requires to be recognised.

As Sri Lanka’s Parliament stands dissolved since early March, Prime Minister Mahinda Rajapaksa convened an all-party leaders’ meeting on Tuesday to discuss the government’s ongoing strategies in combating COVID-19 that has affected over 100 persons so far. “I emphasised the need of working together to successfully battle #COVID19. All present were in agreement and pledged […]

An airspace violation was reported in Washignton, DC and the White House — the residence of the President of the United States — was placed on a lockdown, local media has reported. Fighter jets were scrambled in response to the airspace violation and the US Capitol and its office buildings were briefly evacuated. The concerns […]