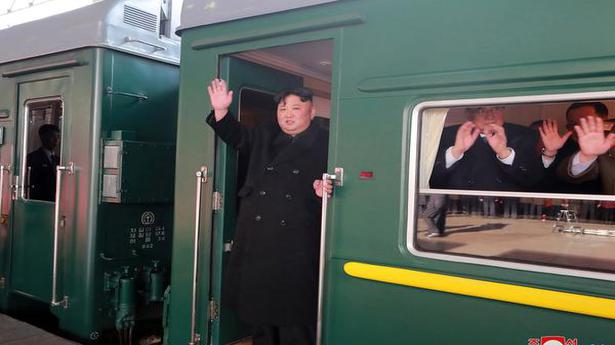 North Korean leader Kim Jong Un returned home on Tuesday after traveling two and a half days by train from Vietnam, where his high-stakes nuclear summit with President Donald Trump ended without any agreement.

The Kim-Trump summit broke down mainly because of disputes over the extent of sanctions relief the North could win in return for its nuclear disarmament steps. Both Washington and Pyongyang blame each other for the summit’s breakdown, but neither side says they would pull out of diplomacy.

Mr. Kim received a salute from the head of the army’s honor guards and was presented with flowers from children. Senior officials also greeted Kim with “their ardent congratulations,” KCNA reported.

The report briefly mentioned Mr. Kim’s summit with Mr. Trump but didn’t say the meeting failed to produce any agreement. The North’s main Rodong Sinmun newspaper previously reported that Mr. Kim and Mr. Trump had agreed to continue talks to resolve issues discussed in their Hanoi summit, but it also didn’t mention the lack of agreement in the summit.

Some observers say the North’s propaganda services won’t report about the summit’s collapse to prevent Mr. Kim from suffering any damage in his leadership at home. They say Mr. Kim is desperate to win sanctions relief to try to resolve his country’s moribund economy and improve public livelihoods.

After his summit with Mr. Trump, Mr. Kim had a two-day official visit to Vietnam that included a meeting with Vietnamese Nguyen Phu Trong and paying his respects at the embalmed body of national hero Ho Chi Minh. It was the first Vietnam visit by a North Korean leader since his late grandfather and North Korea founder Kim Il Sung went in 1964. The KCNA dispatch on Tuesday called Kim Jong Un’s Vietnam visit “successful.”

The Hanoi summit between Mr.Trump and Mr. Kim followed their meeting in Singapore last June that ended with Mr. Kim’s vaguely worded promise to work toward “complete denuclearization of the Korean Peninsula.”

China on Wednesday signalled that it was not yet prepared to step aside and allow the United Nations Security Council (UNSC) to list terror outfit Jaish-e-Mohammed (JeM) founder-leader Masood Azhar as an international terrorist, hours before the world body is to meet for a crucial vote. In response to a question on China’s stance on […]

The UAE on August 13 became the first Gulf country and the third in the Arab world to establish diplomatic relations with Israel as part of a deal to halt the controversial annexation of parts of the West Bank that Palestinians see as a part of their future state. Source: thehindu.com Related

WHO issues travel advisory after spurt in measles cases

Measles outbreak around the world, with the latest preliminary reports from the World Health Organisation (WHO) putting millions of people globally at risk, has prompted the health organisation to announce travel recommendations for areas that are on measles alert. With almost thrice as many cases reported to date in 2019 as there were at this […]