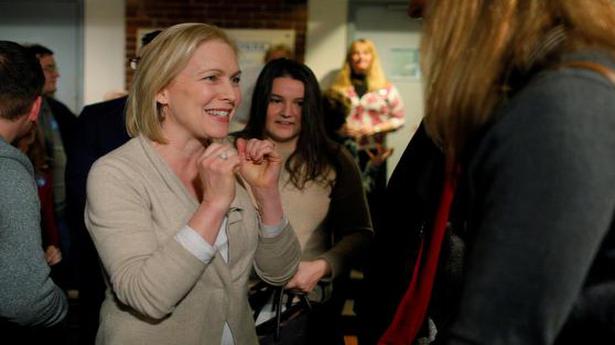 New York Sen. Kirsten Gillibrand formally joined the 2020 White House race on Sunday and previewed the hard line she will take against President Donald Trump by announcing a rally outside one of his signature Manhattan properties.

She had spent more than a month travelling around the country to gauge support for a run.

In the video, Ms. Gillibrand says that the country needs a leader who “makes bold, brave choices” and “someone who isn’t afraid of progress. That’s why I’m running for president.”

She said her debut speech as a candidate will come next Sunday in front of the Trump International Hotel & Tower in New York.

Ms. Gillibrand has been one of the most forceful critics of the Trump administration. Using the backdrop of one of Trump’s marquee properties is a clear challenge to the president.

She announced her exploratory committee in January in an appearance on “The Late Show with Stephen Colbert.” Since then, she has visited a number of states to assess political support for a White House bid.

This coming week she plans to campaign in Michigan, Iowa and Nevada, leading up to her New York kickoff.

Ms. Gillibrand has been a vocal advocate for electing more women to office, as well as combating sexual assault and violence in politics and the military.

China is swiftly building a 1,000-bed hospital dedicated to patients infected with a new virus that has killed 26 people, sickened hundreds and prompted unprecedented lockdowns of cities during the country’s most important holiday. On the eve of the Lunar New Year, transportation was shut down on Friday in at least 10 cities with a […]

The pandemic’s ongoing spread prompted Google to push back the reopening until January and now it has prompted yet another delay. Source: thehindu.com Related