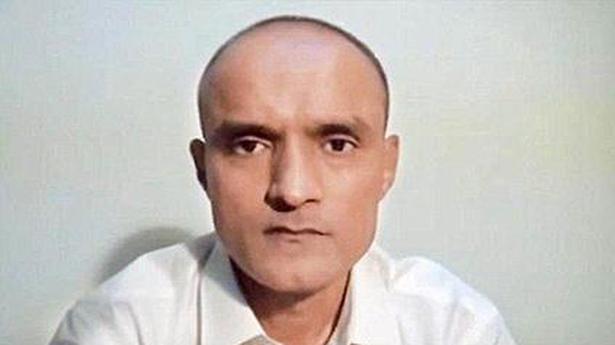 After the ruling of the International Court of Justice (ICJ), Pakistan agreed to provide consular access to Mr. Jadhav, 49, who was arrested in Balochistan province in March 2016. He was sentenced to death in April 2017.

“Commander Jadhav remains in Pakistan’s custody for espionage, terrorism and sabotage,” he said.

India said on August 29 it had asked for “immediate, effective and unhindered” consular access and was in touch with Pakistan through diplomatic channels.

However, Mr. Faisal’s tweets on September 1 didn’t say if the access was unhindered as demanded by India.

On August 1, the Pakistan Foreign Office said Mr. Jadhav would be granted consular access the next day. However, the meeting, which was scheduled for 3 p.m. on August 2, did not materialise amid differences between India and Pakistan on the terms of the access.

On July 17, the ICJ ordered Pakistan to undertake an “effective review and reconsideration” of the conviction and sentence and grant consular access to India without further delay.

One of the conditions put by Pakistan reportedly was the presence of a Pakistani official when Mr. Jadhav is allowed to meet Indian officials. India rejected it, insisting that the access be “unimpeded” and be in the light of the ICJ judgment.

Pakistan says its security forces arrested Mr. Jadhav from the restive Balochistan province on March 3, 2016, after he entered from Iran. However, India maintains that he was kidnapped from Iran where he had business interests after retiring from the Navy.

An Airbus labour union called for a 24-hour strike on Wednesday at the aircraft manufacturer’s plants near Seville, Spain, as the company announced talks on cost cuts. Local union UGT-FICA said in a statement on its Facebook page that the strike is a protest against layoffs. The union also said the company has not fulfilled […]

Hong Kong’s airport cancelled all flights on Monday, with authorities blaming demonstrators for the disruption of one of the world’s busiest terminals, a dramatic escalation of anti-government protests that have roiled the Asian financial hub. At the same time a Chinese official in Beijing warned signs of “terrorism” were emerging. China’s People’s Armed Police also […]

Four Sri Lankan Muslim Ministers, who resigned following the Easter Sunday bombings that killed 258 people, have rejoined the government after investigators found no link in their alleged involvement with a local islamist extremist group. Two senior Muslim leaders Rauff Hakeem — the leader of the Sri Lanka Muslim Congress (SLMC) and Rishad Badiyudeen, the […]