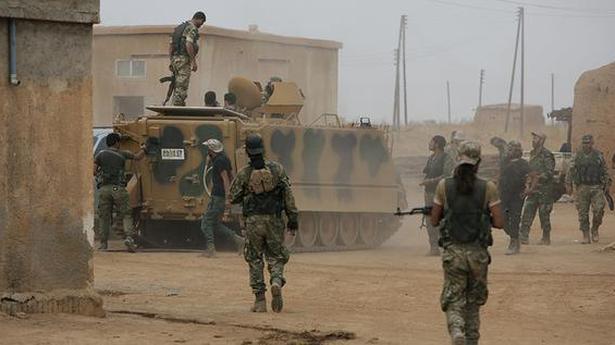 Kurdish forces in northeastern Syria left several positions along the long border with Turkey on Thursday, complying with a deal that sees Damascus, Ankara and Moscow carve up their now-defunct autonomous region.

Russian forces have started patrols along the flashpoint border, filling the vacuum left by a U.S. troop withdrawal that effectively handed back a third of the country to the Moscow-backed regime of President Bashar al-Assad.

U.S. President Donald Trump has praised the agreement reached in Sochi by Turkey and Russia and rejoiced that U.S. personnel were leaving the “long blood-stained sand” of Syria, leaving just a residual contingent behind “where they have the oil”.

The deal signed in the Black Sea resort by Syria’s two main foreign brokers gives Kurdish forces until Tuesday to withdraw to a line 30 km from the border.

The Syrian Observatory for Human Rights reported that the Kurdish-led Syrian Democratic Forces had pulled out of some areas at the eastern end of the border on Thursday. “The SDF have withdrawn from positions between Derbasiyeh and Amuda in the Hasakeh countryside,” Britain-based war monitor’s head, Rami Abdel Rahman, said.

Fighters of the Kurdish People’s Protection Units (YPG) — the main component of the SDF — remained in many positions along the 440 km border, he added.

The Observatory also reported clashes near the town of Tal Tamr between SDF fighters and some of the Syrian former rebels paid by Turkey to fight battles.

U.S. House impeaches Donald Trump for abuse of power Donald Trump became the third U.S. President to be impeached on December 18, as the House of Representatives formally charged him with abuse of power in a historic step that could inflame partisan tensions across a deeply divided America. Anti-Citizenship Act protests: Prohibitory orders imposed across Karnataka till December 21 […]