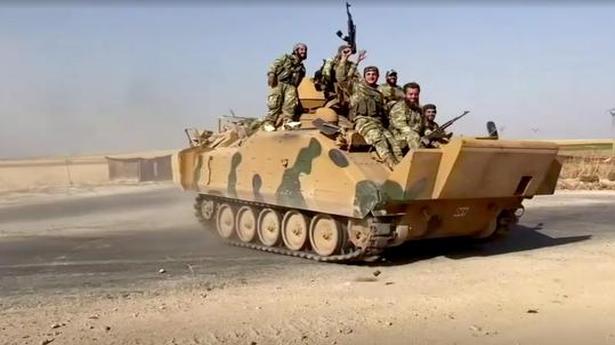 Syria’s Kurds on Sunday announced a groundbreaking deal with Damascus on a Syrian troop deployment near the border with Turkey, as Ankara pressed a deadly cross-border offensive that has sparked an international outcry.

The announcement came as the United States ordered the withdrawal of almost its entire ground force in Syria.

Defence Secretary Mark Esper said the move to withdraw 1,000 U.S. troops came after Washington learned that Turkey was pressing further into Syria than had been expected.

Turkey’s relentless assault, which has seen air strikes, shelling and a ground incursion manned mainly by Syrian proxy fighters, has killed scores of civilians and fighters since its launch on Wednesday.

The Kurds feel they have been betrayed by the United States, their once formidable ally in the fight against the Islamic State jihadist group, and left to fend for themselves in the battle against Turkish forces.

The massively outgunned Kurds described their deal with the Syrian government as a necessary step to stop the assault.

“In order to prevent and confront this aggression, an agreement has been reached with the Syrian government… so that the Syrian army can deploy along the Syrian-Turkish border to assist the Syrian Democratic Forces (SDF),” the Kurdish administration said in a statement.

It came after Syria’s state news agency SANA said the army was sending troops to the north to “confront the Turkish aggression”.

In an editorial published in Foreign Policy magazine, SDF chief Mazlum Abdi wrote: “If we have to choose between compromises and the genocide of our people, we will surely choose life for our people.”

Kurdish authorities and foreign powers have warned of a major humanitarian crisis, which has already forced tens of thousands to flee their homes.

They have also warned repeatedly that the hostilities could undermine the fight against IS and allow jihadists to break out of captivity.

Turkey’s President Recep Tayyip Erdogan said the aim of Operation Peace Spring was to establish a “security zone” that would extend 30 to 35 km into Syria and run between the Kobane to Hasakeh, a stretch of 440 km.

The Syrian Observatory for Human Rights war monitor said at least 26 civilians were killed on Sunday.

Among them was Kurdish news agency ANHA’s correspondent, Saad Ahmad. He died in a Turkish air strike on a convoy of vehicles transporting civilians and journalists.

At least 60 civilians have now died on the Syrian side of the border, with Turkish reports putting the number of civilians dead from Kurdish shelling inside Turkey at 18.

The Observatory said pro-Ankara fighters “executed” at least nine civilians on Saturday near the Syrian town of Tal Abyad.

The Kurds said a female Kurdish party official and her driver were among those killed.

Aid groups have warned of another humanitarian disaster in Syria’s eight-year-old war if the offensive is not halted.

The UN humanitarian agency OCHA said the exodus sparked by the fighting had grown to 130,000 people and it was preparing for that figure to more than triple.

France’s President Emmanuel Macron, at a joint news conference with Germany’s Chancellor Angela Merkel, said the Turkish offensive — over which both countries have decided to suspend arms exports to Ankara — risked creating an “unbearable humanitarian situation”.

Mr. Macron told reporters that he and Merkel had spoken separately with Mr. Trump and Mr. Erdogan to deliver a single, clear message: “Our common wish is that the offensive must cease”.

Prime Minister Giuseppe Conte of Italy, one of Ankara’s main arms suppliers, said he would press for an EU ban on arms sales to Turkey.

Even Turkish Cypriot leader Mustafa Akinci, who heads of a breakaway state only recognised by Ankara in the north of the east Mediterranean island, chimed in, issuing a highly rare rebuke of the Turkish government.

“Even if we call it Peace Spring, it is blood that is spilling and not water,” Mr. Akinci wrote on Facebook.

Fight for the future of Bolivia

On November 10, the day Bolivian President Evo Morales resigned amid pressure from the armed forces and street violence, Luis Fernando Camacho, leader of the civic group Comité Pro-Santa Cruz, entered Palacio Quemado in La Paz, the official residence of the President. Flanked by armed forces and with an evangelical ally clutching a Bible, Mr. […]

A total of 3,000 kilograms of solid waste has been collected from Mt. Everest sincewhen Nepal launched an ambitious clean-up campaign on April 14. The campaign is aimed at bringing back tonnes of trash from the world’s highest peak, which has lately turned into a “garbage dump”. The 45-day ‘Everest Cleaning Campaign’, led by Solukhumbu […]