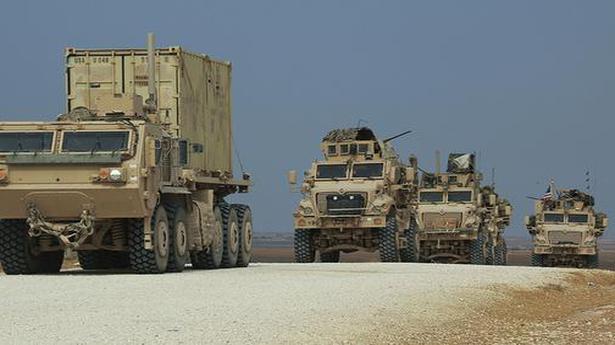 Turkey on Sunday said Kurdish fighters were withdrawing from the border town of Ras al-Ain under an agreement brokered with the United States.

“A convoy of approximately 55 vehicles entered Ras al-Ain and a convoy of 86 vehicles departed in the direction of Tal Tamr,” the Turkish defence ministry said in a statement and simultaneously distributed pictures of the evacuation.

Turkey’s Defence Ministry said one Turkish soldier was killed on Sunday in an attack by Kurdish fighters in the Tal Abyad border area.

Meanwhile, the Syrian Observatory for the Human Rights said that the U.S. forces withdrew from Sarrin, their largest base in northern Syria on Sunday, a monitor said.

On Sunday, more than 70 U.S. armoured vehicles escorted by helicopters drive past the northern Syrian town of Tal Tamr carrying military equipment. Some flew the American stars-and-stripes flag as they made their way eastwards, he said.

Peter O’Neill was arrested by police at Jackson’s International Airport in Port Moresby on Saturday after flying back from Brisbane, Australia, where he had been stranded because of COVID-19 lockdowns. Source: thehindu.com Related

Australian troops and personnel will stay in Iraq to continue their mission, Prime Minister Scott Morrison said on Thursday, as tensions eased following an Iranian attack on U.S. forces there. Speaking to reporters, Mr. Morrison added that an Australian naval vessel would travel as planned toward the Strait of Hormuz this week, to help protect […]

Pakistan on Wednesday halted all domestic passenger flights to stop the spread of the COVID-19 after reporting nearly 1,000 cases in the country, just as Libya became the latest at-risk mideast nation to report its first infection. The announcement by Libya’s U.N.-backed government leaves just war-torn Yemen as the last country in the mideast to […]