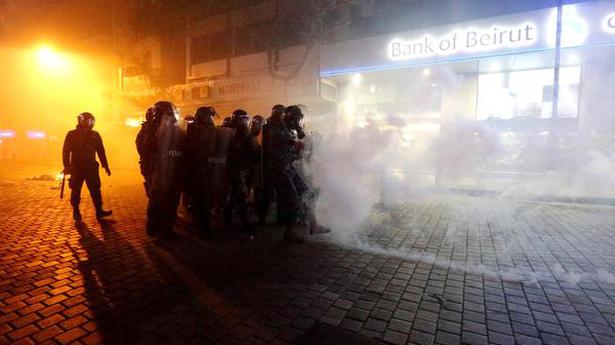 Lebanese demonstrators have taken to the streets to demand an end to a months-long political vacuum, with police firing tear gas at the start of what protesters have billed a “week of wrath“.

The charge dispersed the crowd, some of whom smashed paving stones to hurl them at police while others distributed onions to ward off the effects of the tear gas.

The civil defence said it had treated civilians and members of the police for light injuries at the scene, without saying how many, while others who had been wounded were taken to hospital.

On Twitter, the security forces denounced “attacks” led by “rioters” who had thrown stones and firecrackers at police.

Although protests had declined in size in recent weeks, demonstrations have been ongoing since mid-October, increasingly targeting banks and state institutions blamed for driving Lebanon towards collapse.

The unprecedented cross-sectarian movement has been fuelled by a crippling economic crisis, the worst since Lebanon’s 1975-1990 civil war.

Debt-burdened Lebanon has been without a government after Saad Hariri resigned as prime minister on October 29, as political parties fail to agree on the makeup of a new team.

“Rebel, Beirut,” dozens of protesters chanted as they marched to the sound of drums towards the home of premier designate Hassan Diab, who has struggled to form a cabinet since he was named on December 19.

“I want a government that can resolve the economic crisis as quickly as possible,” said Nour, a 31-year-old marcher.

As a liquidity crisis grows and the cost of living rises, protesters have returned to the streets to urge politicians to swiftly form a cabinet of experts to respond to their demands.

On Tuesday morning, dozens of protesters blocked key highways in and around Beirut with overturned rubbish bins and burning tyres.

Laila Youssef, 47, said she was taking part to call on politicians to wake up.

“We’ve gone back to closing down roads because we can’t stand it anymore,” the mother of three said. “What we earn today is not enough to buy the basics for home.”

Many Lebanese have lost their jobs or seen their salaries reduced by half in recent months.

Even as banks cap withdrawals, the value of the Lebanese pound to the U.S. dollar has fallen by almost half on the parallel exchange market.

In a televised speech, President Michel Aoun acknowledged the delay in agreeing a new cabinet line-up but appealed for more time to find suitable candidates.

“What is needed is a government… to address the pressing economic and financial crisis,” he told foreign envoys.

“The formation of this government demands choosing competent individuals who deserve the trust of the people and parliament, which takes time,” he said.

“We want a government as soon as possible because the economic situation can no longer wait and the country is sliding towards collapse,” he said.

The protests had dwindled to symbolic gatherings in recent weeks after Diab, a professor and former education minister, was nominated last month.

But Lebanese have returned to the streets since Saturday, when hundreds gathered across the country to vent their frustration.

The protesters are demanding a new government made up solely of independent technocrats, but analysts warn this may be a tall order in a country ruled by a sectarian power-sharing system since the end of the civil war.

The World Bank has warned of a recession that may see the proportion of people living in poverty climb from a third to half the population.

Even before the protests began, economic growth in Lebanon had slowed sharply in the face of repeated political deadlocks in recent years, compounded by the war in neighbouring Syria.

A member of a council that advises Iran’s Supreme Leader died on March 2 after falling sick from the new SARS-nCOV, state radio reported, becoming the first top official to succumb to the illness that is affecting members of the Islamic Republic’s leadership. Expediency Council member Mohammad Mirmohammadi died at a Tehran hospital of the […]