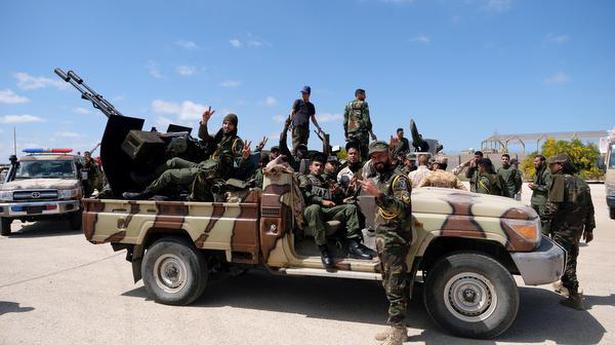 The conflict shaking Libya escalated on Sunday as forces of Field Marshal Khalifa Haftar launched an air strike on a suburb of Tripoli and the UN-backed government vowed a major counteroffensive.

The United Nations called for an urgent two-hour truce to allow evacuations of civilians and the wounded, while the unity government said the fighting had so far killed 21 people.

Rivalries between the two camps threaten to plunge the country into a full-blown civil war after Field Marshal Haftar on Thursday launched an offensive on Tripoli. After a pause overnight, fierce fighting flared anew on on Sunday morning south of the capital between Field Marshal Haftar’s self-styled Libyan National Army (LNA) and forces backing the internationally recognised Government of National Accord (GNA). As clashes raged in the mainly farmland region of Wadi Raba and the destroyed international airport south of the capital, a spokesman for pro-GNA forces announced a counteroffensive against Field Marshal Haftar’s forces.

Colonel Mohamed Gnounou told reporters that operation “Volcano of Anger” was aimed at “purging all Libyan cities of aggressor and illegitimate forces”, in reference to Field Marshal Haftar’s fighters. The U.S. military said on Sunday that it had temporarily pulled an unspecified number of its troops out of Libya “in response to security conditions on the ground”.

Pro-Pakistani elements have infiltrated the anti-CAA protests in the US to execute their hidden agenda against India, an Indian-American community leader has said. During a recent protest against the CAA in Washington DC, posters were seen reflective of the presence of pro-Pakistani elements. Not only this, at least two Pakistani-Americans were among the main organisers […]

China played a “constructive role” in reducing tension between Pakistan and India, the foreign ministry said, after the nuclear-armed rivals almost came to blows last month following an attack on a paramilitary convoy in Jammu and Kashmir’s Pulwama district. The sparring threatened to spiral out of control and only interventions by US officials, including National […]