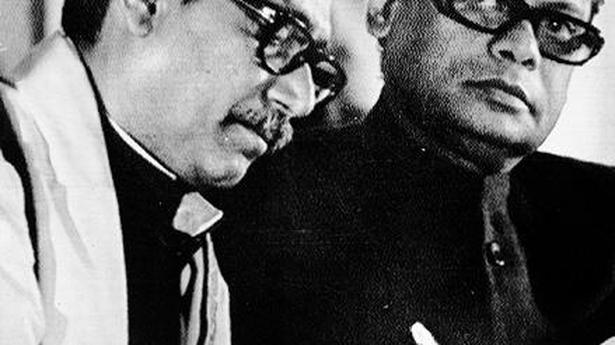 State broadcaster Prasar Bharati will be co-producing a feature film directed by Shyam Benegal on the life of the founding father of Bangladesh, Sheikh Mujibur Rahman, and also a documentary on Bangladesh Liberation War.

The decision was taken after a Bangladeshi delegation led by Dr. Gowher Rizvi, adviser to the Prime Minister of Bangladesh, and including Bangladesh High Commissioner to India, Syed Muazzem Ali, met Information and Broadcasting Secretary Amit Khare here on Tuesday.

The announcement comes in the backdrop of raging debate on the National Register of Citizens in the northeast that seeks to disenfranchise Bangladeshi migrants.

The movie will be directed by Mr. Benegal who, along with scriptwriter Atul Tiwari, was also present during the meeting. The announcement is a culmination of a three-year dialogue between the two countries on the issue.

Co-production of a documentary on the Bangladesh Liberation War was also discussed in the meeting. It was mutually agreed that the director of the documentary would be from Bangladesh who would be assisted by a co-director from India.

A host of other decisions were also inked during the meeting. The Prasar Bharati has agreed to carry Bangladesh TV on its DD Free Dish platform free of cost. The DD Free Dish reaches 30 million households, which is 15% of the total TV households in the country. As a reciprocal gesture, the Bangladesh delegation announced that a Doordarshan channel will be adopted on the soon-to-be launched DTH platform of Bangladesh.

A working agreement on cooperation between All India Radio and Bangladesh Betar was also agreed upon, implementation of which would start from June.

Rockets hit U.S. air base in Afghanistan; no casualties

Five rockets hit a U.S. air base in Afghanistan on Thursday, but there were no casualties, two senior security officials said, and no militant group immediately claimed responsibility. The attack comes as the Afghan government has launched the release of Taliban prisoners from a jail near the Bagram base, as part of a confidence-building step […]

One month on from historically reclaiming Democratic presidential frontrunner status, Joe Biden is in physical and political isolation, basement-bound and largely unheard as Donald Trump commands Americans’ attention with his coronavirus response. It has been an awkward sidelining of an extraordinary comeback story. After nearly self-imploding in the first three state contests in February, former […]