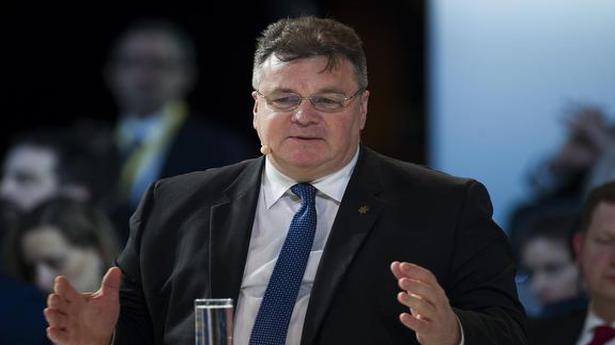 Russia’s decision to make it easier for residents of the rebel-controlled eastern Ukraine to obtain a Russian passport is meant to test Ukraine’s new leader and the West should not recognise the documents, Lithuanian Foreign Minister Linas Linkevicius said on Friday.

Mr. Linkevicius told Reuters that the West should consider imposing new sanctions on Russia. “This is a blatant violation of international law and a test to the new leadership in Ukraine,” he said.

“The least we can do is we shouldn’t recognise these passports. How to do that technically, it’s another issue to discuss. Also, we need to look at additional sanctions,” he said.

Western nations imposed sanctions on Russia over its 2014 annexation of Ukraine’s Crimea region and its support for armed separatists battling Kiev’s forces in eastern Ukraine. Some 13,000 people have been killed in that conflict despite a notional ceasefire signed in Minsk in 2015.

Mr. Linkevicius, who in Kiev on Friday became the first minister of an EU country since Ukraine’s election to meet President-elect Zelenskiy, said they had discussed the passport issue.

“Mr. Zelenskiy also raised the possibility of resetting the Minsk ceasefire agreement without giving any concessions to Russia,” he said.

The minister urged Mr. Zelenskiy to deliver on his electoral promise of tackling corruption, which he described as the “most dangerous cancer” facing Ukraine.

Last month, Lithuania’s relation with Russia came under renewed strain after a Vilnius court found former Soviet defence minister Dmitry Yazov, in absentia, guilty of war crimes and crimes against humanity for his role in a 1991 crackdown against Lithuania’s pro-independence movement.

Russia branded the verdict “extremely unfriendly and essentially provocative” and opened a probe into the judges involved.

Linkevicius accused Russia of seeking to politicise the judicial process by trying to take revenge on the judges, adding: “This is lamentable.”

Former ambassador to Ukraine says Trump pushed to oust her

Former US Ambassador to Ukraine Marie Yovanovitch told lawmakers Friday that President Donald Trump pressured the State Department to oust her from her position. Yovanovitch said in an opening statement obtained by The Associated Press that she was “abruptly” recalled in May and told the president had lost confidence in her. She said she was […]

All the major military contracts, including the deliveries of S-400 air defence missile systems, between Russia and India will be on schedule and the coronavirus pandemic will have no effect on their timeframe, according to India’s top diplomat here. “I don’t think there will be any impact. There has been slight dislocation of a couple […]

A Wisconsin high school student on December 3 stabbed a school resource officer, who responded by shooting the teenager, police said, in the second such incident over the last two days in the state. Oshkosh West High School, about 85 miles (137 km) north of Milwaukee, was put on lockdown after the altercation, Oshkosh Chief […]