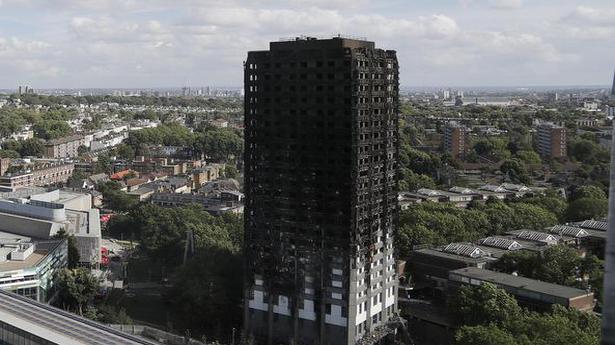 A report on a deadly apartment block fire in London condemned the London Fire Brigade and concluded that fewer people would have died if the building were evacuated more quickly.

Britain’s Press Association said the leaked report, which was to be published Wednesday, also accused brigade Commissioner Dany Cotton of “remarkable insensitivity” for testifying that she would not have done anything differently in the early hours of the June 14, 2017 blaze that killed 72 people at Grenfell Tower.

Inquiry chairman Martin Moore-Bick criticised a fire department policy that led to residents in the public housing building being told to stay in their apartments to await rescue. The order remained in place for nearly two hours after the blaze broke out just before 1 a.m., and was not rescinded until 2.47 a.m. as the building was engulfed in flames.

“That decision could and should have been made between 1.30 a.m. and 1.50 a.m. and would be likely to have resulted in fewer fatalities,” he said.

Mr. Moore-Beck said the “principal reason” the flames shot up the sides of Grenfell Tower was the presence of relatively new combustible aluminum composite cladding with polyethylene cores, which acted as a “source of fuel.” While he had not planned to determine whether the building complied with fire regulations at this stage in the investigation, Mr. Moore-Beck said there was compelling evidence that the tower’s external walls “actively promoted” the fire.

The report concluded the fire started as the result of an electrical fault in a large fridge-freezer but noted the resident of the apartment where the fire broke out bore no blame for the tragedy that killed so many people and displaced scores of families.

Some activists said they brought fire-safety concerns to the local government body responsible for the building even before the blaze.

There was no immediate reaction to the fire report, since it was leaked.

Those most directly involved in the Grenfell Tower tragedy were given an advance look at the document, but were forced to sign non-disclosure agreements until the report is officially released. Several organizations, including the London Fire Brigade, said they would only be able to respond on Wednesday when the report became public.

Hunted by a virus, ignored by government

Blacks and browns, who make up 23% of those hospitalised with virus, account for 35% of deaths Source: thehindu.com Related

A Taliban suicide blast in the centre of Kabul killed at least 10 people and wounded more than 40 on Thursday, destroying cars and shops in an area near the headquarters of Afghanistan’s NATO force and the U.S. embassy, officials said. The Taliban claimed responsibility for the attack even as the insurgents and U.S. officials […]

Maradona pleads for ‘Hand of God’ to end coronavirus pandemic

The Argentine football legend refers to his hand-assisted infamous goal in the 1986 World Cup against England Source: thehindu.com Related