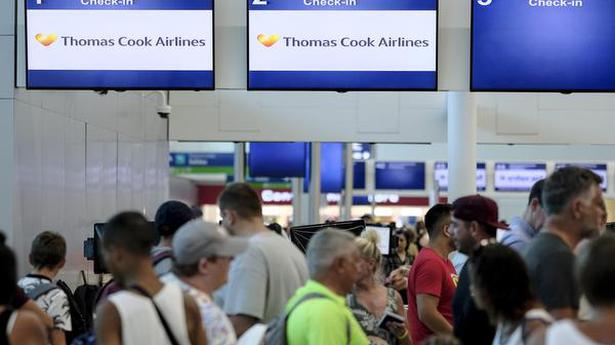 Britain has repatriated 10% of nationals who were stranded abroad after the collapse of travel firm Thomas Cook, authorities said on Tuesday, as anger erupted over excessive management pay.

The Civil Aviation Authority (CAA) regulator, which is managing the UK’s biggest repatriation since World War II after Thomas Cook’s dramatic bankruptcy, said in a statement that it flew back 14,700 of the 150,000 stranded Britons on Monday.

The CAA added that it hoped to bring back another 16,500 people on Tuesday.

The dramatic collapse of Thomas Cook left 600,000 customers of all nationalities stranded in popular tourist destinations dotted around the globe, including Cancun, Kos, Las Vegas and Lanzarote.

“Following the very sad news … that Thomas Cook had stopped trading and its aircraft were grounded, we launched at the government’s request our operation to return more than 150,000 people to the UK,” said CAA Chief Executive Richard Moriarty.

Mr. Moriarty added: “A repatriation of this scale and nature is unprecedented and unfortunately there will be some inconvenience and disruption for customers.

“We will do everything we can to minimise this as the operation continues.

“We want people to continue to enjoy their holiday, so we will bring them back to the UK on their original departure day, or very soon thereafter.”

Meanwhile, criticism is mounting over the pay of Thomas Cook’s management, who steered the 178-year-old company into the rocks with vast debts.

The Sun tabloid newspaper slammed Thomas Cook’s “fat cat bosses”, adding that the group’s last five chief executives had “pocketed” a total of £47 million in pay and bonuses since 2007.

The failed company’s Swiss chief executive Peter Fankhauser, who apologised for his group’s failure on Monday, has been paid £8.4 million since 2014 according to the paper.

“I have questions — for one about whether it’s right that the directors, or whoever, the board, should pay themselves large sums when businesses can go down the tubes like that,” said Mr. Johnson, quoted by British media in New York where he is attending the UN General Assembly.

Quizzed about tougher rules, Mr. Johnson added: “I think that you need to have some system by which tour operators properly insure themselves against this kind of eventuality.”

Thomas Cook, which had struggled against fierce online competition for years and blamed Brexit uncertainty for a recent drop in bookings, declared bankruptcy after failing to secure £200 million from private investors.

Monday’s bankruptcy followed a lengthy period of chronic financial turmoil after a disastrous series of mergers left it burdened with soaring debt, a large branch network and high costs.

The CAA will continue to fly UK passengers home until October 6, with those affected asked to check its official website.

British PM Boris Johnson will be back at work on Monday, office says

British Prime Minister Boris Johnson will be back at work on Monday, a Downing Street spokeswoman confirmed on Saturday, after having recovered from Source: thehindu.com Related

Ethiopian Prime Minister Abiy Ahmed won the Nobel Peace Prize 2019 for his efforts to resolve the long-running conflict with neighbouring foe Eritrea. He received the award for his efforts to achieve peace and international cooperation, and in particular for his decisive initiative to resolve the border conflict with neighbouring Eritrea, a statement from the […]

Pakistan to lift ban as TikTok falls in line

Pakistan has decided to lift a ban on popular social media app TikTok after the company vowed to block all accounts involved in spreading “obscenity a Source: thehindu.com Related