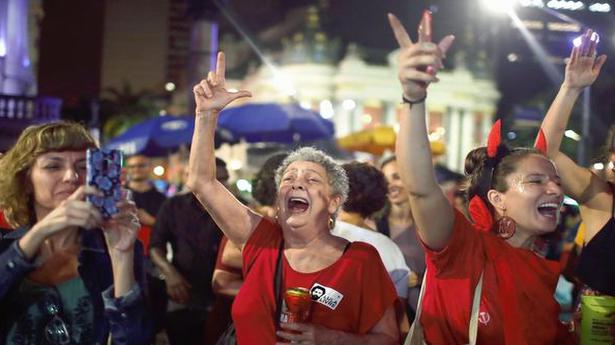 Brazil’s President Jair Bolsonaro asked his supporters on Saturday “not to give ammunition to the scoundrel,” the day after popular leftist leader Luiz Inácio Lula da Silva walked free from jail.

Breaking his silence on the release of his arch-nemesis, Mr. Bolsonaro told his Twitter followers: “Lovers of freedom and good, we are a majority. We cannot make mistakes.” He added Mr. Lula was “momentarily free, but guilty.”

Lula’s dramatic exit from jail in the southern city of Curitiba on Friday came a day after a controversial Supreme Court ruling that could release thousands of convicts and undermine a sprawling corruption investigation called Car Wash.

A 6-5 decision overturned a rule requiring convicted criminals to go to jail after losing their first appeal. Those convicts would remain free until they had exhausted their rights to appeal — a process critics say could take years in cases involving people able to afford expensive lawyers.

In an impassioned address to hundreds of supporters who greeted him as he walked out of the federal police headquarters, Mr. Lula, 74, vowed to keep fighting for poor people.

The former union leader who helped found the Workers Party (PT) also denounced the economic policies of Mr. Bolsonaro, who was swept to power in 2018 in an election Mr. Lula had been widely tipped to win. “People are hungrier, they have no jobs, people work for Uber or delivering pizzas on a bike,” Mr. Lula said in remarks sometimes drowned out by cheers from the crowd and fireworks overhead.

Mr. Lula, who led Brazil through a historic boom from 2003 to 2010, earning him the gratitude of millions of Brazilians for redistributing wealth to haul them out of poverty, was serving eight years and 10 months for corruption.

He was sentenced to almost 13 years in jail in February in a separate corruption case and still faces another half dozen corruption trials.

Mr. Lula has denied all the charges, arguing they were politically motivated to keep him out of the 2018 presidential election that was won by Mr. Bolsonaro.

Justice Minister Sergio Moro, who convicted Lula when he was a judge in 2017, said the Supreme Court’s decision must be respected, but he noted “Congress can modify the Constitution or the law” to allow the jailing of convicted criminals after their first appeal.

“I am delighted that he has been released from jail, something that never should have happened in the first place,” Mr. Sanders tweeted after Mr. Lula walked out.

Even though he has been freed, Mr. Lula’’ criminal record will prevent him from resuming his political career.

That could change, however, if the Supreme Court were to decide in a separate case that Mr. Moro had been biased.

Mr. Lula has so far indicated he is not going to use his freedom to sit on the political sidelines.

China reported 16 new coronavirus cases for May 31, the highest since May 11 and up from 2 cases reported a day earlier, the country’s health commiss Source: thehindu.com Related