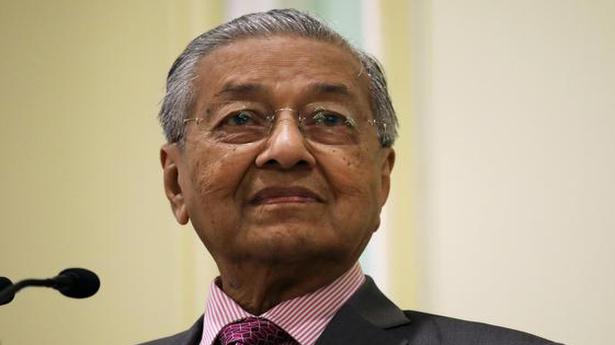 A defiant Malaysian Prime Minister Mahathir Mohamad on Tuesday said he stands by his remarks on Kashmir, asserting that he speaks his mind and does not retract and change, days after India expressed regret over his statement.

Raising the Kashmir issue at the UN General Assembly last month, Mr. Mahathir alleged that India has invaded and occupied Jammu and Kashmir and asked New Delhi to work with Pakistan to resolve the issue, drawing strong reaction from the Ministry of External Affairs (MEA).

Speaking to reporters during a press conference in Parliament, he said the people of Kashmir had benefited from the resolution of the United Nations, and that we should all abide, not just India and Pakistan, but even the United States of America and other countries.

“We speak our minds. We don’t retract and change”, the Malaysian Prime Minister was quoted as saying by The Star newspaper.

Earlier this month, MEA spokesperson Raveesh Kumar said India and Malaysia have traditionally enjoyed good and friendly ties. “We deeply regret these comments since they are not based on facts,” he said.

Acknowledging the strained diplomatic relations between Malaysia and India over his remarks, Mr. Mahathir said that it is necessary to speak out on the issues, even though such remarks could be disliked by some.

“We have to speak up for people. So, sometimes what we say is liked by some and disliked by others,” he said.

Coronavirus hits world superpowers as some look to reopen

A fire in a three-storey apartment building in downtown Las Vegas where residents were apparently using their stoves for heat killed six people and forced some residents to jump from upper-floor windows to escape the heavy smoke before dawn on December 21, authorities said. Investigators reported that the fire started around a first-floor unit’s stove […]

A scientist who once worked at a U.S. laboratory in New Mexico has pleaded guilty to lying about his involvement with a Chinese government technology program. Turab Lookman (67), entered his plea on Friday during a hearing in Albuquerque after reaching an agreement with prosecutors. He is awaiting sentencing, which could include up to five […]