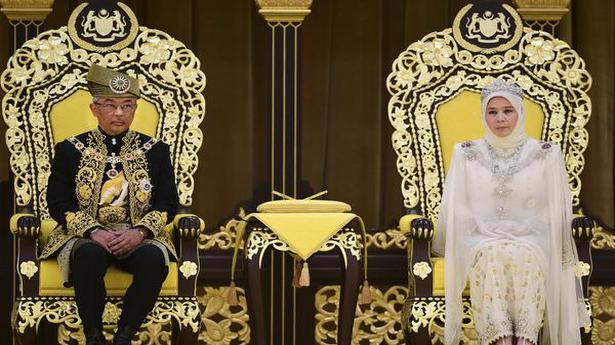 Malaysia’s sports-loving Sultan Abdullah Sultan Ahmad Shah called for racial unity as he was installed on Tuesday as the country’s 16th king under a unique rotating monarchy system.

It was a double celebration for Sultan Abdullah from central Pahang state, who turned 59 the same day. He was picked as Malaysia’s new ruler in January, after Sultan Muhammad V from northeast Kelantan state abruptly resigned after just two years on the throne in the first abdication in the nation’s history.

Nine ethnic Malay state rulers take turns as king for five-year terms under the world’s only such system, which has been maintained since Malaysia’s independence from Britain in 1957.

In his coronation speech, Sultan Abdullah warned that any attempt to sow racial discord in the country was akin to “playing with fire that will burn not only oneself but also burn down the whole village.

“Unity and national harmony are the country’s pillars of strength. Do not ever stoke racial misunderstanding by raising matters that can threaten national unity and harmony,” he said.

A large number of ethnic Malay Muslims, who make up about 60 percent of Malaysia’s 32 million people, still support the opposition. While carrying out economic and institutional reforms, Mahathir’s multiethnic alliance has to quell fears among Malays that their privileges under decades-old affirmative action that favors them in jobs, business and education will be eliminated.

Ethnic Chinese and Indians comprise about 30 percent of the population.

Mr. Mahathir in his speech acknowledged minor incidents of racial strife and said the government has set up an advisory body to strengthen racial unity. He said the government will step up efforts to bolster the economy and fight corruption to ensure that “no one is above the law.”

Known as the Yang Di-Pertuan Agong, or He Who Is Made Lord, Malaysia’s king plays a largely ceremonial role, since administrative power is vested in the prime minister and Parliament. The monarch is highly regarded as the guardian of Islam and Malay tradition, particularly among the Malay Muslim majority. He is also the nominal head of the government and armed forces.

All laws, Cabinet appointments and the dissolution of Parliament for general elections require his assent. The king also issues pardons for criminals.

Sharing a light moment, U.S. President Donald Trump and Prime Minister Narendra Modi laughingly shook hands after Mr. Trump told reporters that Mr. Modi, who was speaking in Hindi, “actually speaks very good English”. Ahead of a bilateral meeting, as the two leaders were fielding a barrage of questions from the media, Mr. Modi said […]