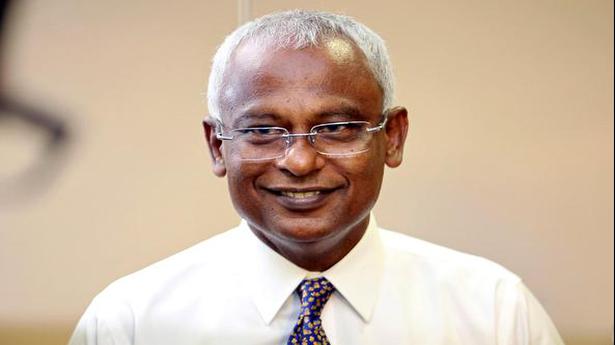 Taking a short break from work, President of the Maldives Ibrahim Mohamed Solih will fly to Bengaluru on Sunday to catch the IPL match between Royal Challengers Bangalore and Chennai Super Kings.

In February, this year, Mr. Solih, a cricket enthusiast, led the Maldivian team in a friendly match against a visiting Air India team that cricketer Yuvraj Singh led.

Maldivian Foreign Minister Abdulla Shahid said Mr. Solih’s presence at Sunday’s match would reflect “the rejuvenation of the bilateral ties” between the two nations, including in the area of sports cooperation. “It also reflects the growing popularity and reach of the IPL beyond Indian shores to the wider South Asian community,” he told The Hindu over telephone from Male.

Further, Mr. Shahid said the visit was an opportunity to explore and deepen the cricketing ties between the two countries, including in facilitating training opportunities for our youth.

The Maldives is planning to build a cricket stadium with Indian assistance, to help create a new breed of Maldivian cricketers who can compete at the international level. “It is my hope and dream that one day soon I would have the opportunity to witness a cricket match between Maldives and Indian players in this very field,” he said.

US President Donald Trump on Saturday opened a new front in the impeachment battle that threatens his administration, blasting a prominent member of his party for criticizing his push to get foreign nations to probe a leading Democratic rival. The Republican president, who launched a stream of invective at Democrats and the media this week […]

The shooting at a mosque near Oslo is being treated as an “attempted act of terror”, Norwegian police said on Sunday. “We are looking at an attempted act of terror,” acting chief of the police operation Rune Skjold told a press conference. Mr. Skjold said the investigation had shown that the man appeared to hold […]

The White House moved to “lock down” all records of U.S. President Donald Trump’s phone call seeking Ukraine’s interference in the 2020 U.S. election, a whistleblower’s complaint released on Thursday alleges, in the latest explosive episode in the rapidly unfolding impeachment drama. The top-secret complaint, declassified by the administration and released by Congress, caps a […]