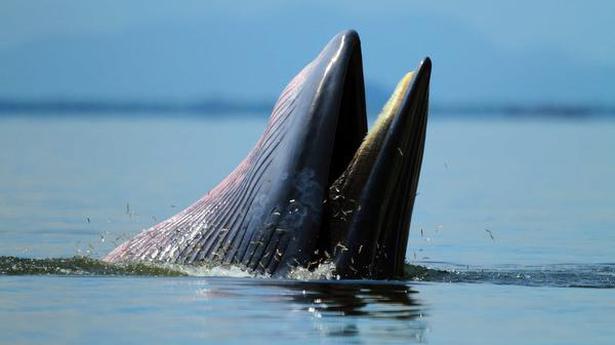 Like the Bible’s Jonah, Rainer Schimpf has narrowly survived after being caught in the jaws of a whale.

The 51-year-old marine conservationist was swept into the mouth of a large Bryde’s whale off the coast of the southern South African town of Port Elizabeth while filming a sardine run last month.

“Looming up out of darkness below came a Bryde’s whale shooting up into the ball of fish, gulping all in its path,” he said, adding that his legs were hanging from the mammal’s mouth during the incident at the end of February.

Mr. Schimpf’s wife Silke and a photographer watched on in horror from their boat, chartered to watch the famous sardine run which creates a marine feeding frenzy off Africa’s southern coast.

“I felt some pressure around my waist and I immediately knew what had happened.

“(It) accidentally included me in its mouth together with its main meal—the sardines.”

Mr. Schimpf, an award-winning conservationist with 20-years experience, said the ordeal lasted “matter of seconds” — rather than the three nights Jonah spent in a whale’s stomach, according to the Bible story.

“(Then) the whale realised its mistake and opened its mouth releasing me. I was washed out with what felt like tonnes of water from its mouth,” he said.

Bryde’s whales can weigh up to 30 tons when mature and typically eat krill and fish.

When he finally reached the surface he took a breath and rejoined his fellow snorkelers who were unaware of the unfolding drama.

“We swam back to the vessel, climbed up and checked if I and the camera were OK — no broken bones, no cracked ribs — so all was good,” he said.

“Pumped up with adrenaline and not wanting to miss the bait ball action, I went back into the sea, this time looking for sharks,” he added with a smile.

President Donald Trump abruptly declared on Thursday the U.S. will recognize Israel’s sovereignty over the disputed Golan Heights, a major shift in American policy that gives Israeli Prime Minister Benjamin Netanyahu a political boost a month before what is expected to be a close election. The administration has been considering recognizing Israel’s sovereignty over the […]

President Donald Trump on Wednesday said he ordered a major increase in sanctions on Iran in the latest U.S. move to pressure Tehran, which U.S. officials say probably carried out a crippling weekend attack on Saudi oil facilities. Mr. Trump gave no explanation in a brief Twitter posting announcing the order, but the initiative follows […]