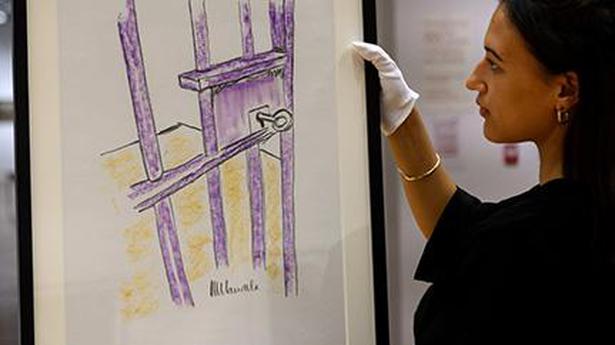 A drawing by late South African leader Nelson Mandela of the door of his prison cell on Robben Island — where he was held for 18 years — will be put up for auction in early May in New York.

“The word ‘iconic’ is so overused but to have a drawing of one of the most important men of the 20th century… would be a remarkable thing,” said Giles Peppiatt, the auction house’s director of modern African art. “It’s the first time this work has ever been exhibited in public. It’s also the first work by Nelson Mandela ever to be sold in the open market.”

The wax pastel crayon drawing shows a few bars of the cell door and a key in the lock, sketched in purple.

The work is one of the few that Mandela — who was jailed for 27 years in total and inspired the struggle against apartheid — kept until his death in 2013. “It was a very personal, very poignant work for him,” Mr. Peppiatt said.

Until now, Mandela’s daughter Pumla Makaziwe Mandela had the work in her possession.

As sales and exports of fish crash, another huge crisis is staring at Sri Lanka’s fisherfolk. Source: thehindu.com Related

South Korea’s Defence Minister said on Tuesday that North Korea’s recent unspecified weapons test was of a rocket engine, amid speculation the North was making preliminary steps toward a prohibited long-range rocket launch. Defense Minister Jeong Kyeong-doo said during a visit to Sydney on Tuesday that Seoul expressed its deep concerns over the engine test […]